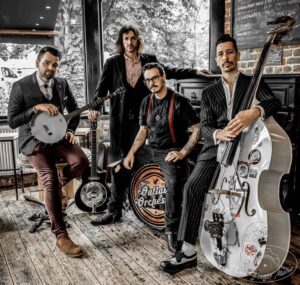 There’s only so much blanket coverage of the current shit-show of affairs that is the modern world in 2020, that the average person can take. Faced with wall-to-wall coverage 24 hours a day, seven days a week, an outlet is required to offset watching the world burn, with humour being the weapon of choice for many. Enter stage left Southampton based “Southern Country Rock Bluegrass and everything in between” four piece The Outlaw Orchestra with their tales of the deep South that most people should be able to identify with.

As banjo/lap steel player Pete Briley explains…“This is Southern Vaudeville, this is a soundtrack for Pantomime Villains”. And no matter how many pundits wax lyrical about The Outlaw Orchestra (and there are plenty that do), no-one will top that simple explanation. In times where offering up entertainment is often forsaken in the frivolous pursuit of trying to reinvent the wheel, The Outlaw Orchestra remember the old stage adage: give the punters what they want and send them home smiling.

Like Hayseed Dixie you shouldn’t write off The Outlaw Orchestra as simply playing it for laughs. For one they are accomplished players, and debut album ‘Pantomime Villains’ contains many examples of this; not least the bluegrass hoedown of ‘Hanging Tree’ where double bass player Alex Barter puts in one almighty shift. But they are also astute song-writers, with a wry sense of humour that doesn’t distract the listener from the music on offer; the rather marvellous ‘Too Much Willie Nelson’ being just one example.

At ten tracks and thirty-three minutes long, ‘Pantomime Villains’ doesn’t overstay its welcome, and is out of Bob’s Country Bunker (where they have both kinds of music: Country & Western) before the beer bottles start flying. The music cooked up is as hot and spicy as the South itself, with many different tastes thrown in. Opener ‘Take A Bow’ is foot-stomping sizzler with oodles of duelling guitar/banjo action as well as some lovely slide guitar from guitarist/vocalist David Roux. The latter stages of the track sound exactly what Aerosmith-with-banjos would sound like. ‘Chicken Fried Snake’ has a great banjo sound throughout mixed with chugging riffs, more cool slide guitar and a nailed-on drum sound from Ryan Smith. Such a great vibe on this one. The aforementioned ‘Hanging Tree’ is glorious, a real toe-tapping feel-good track where each player excels, bad dancing galore when/if gigs ever get back to normal.

‘Whiskey Drinking Liar’ is southern rock with a blues shuffle, as is the lighter ‘Arabia’. The rug gets rolled back for the rockabilly tinged ‘Jumpin’ Jive’ which comes complete with some Quo-esque chords, as well as a sweet guitar solo from Roux which grows into a real barnstormer. ‘Voodoo Queen’ is a heady brew of multiple sounds which will make your head spin, especially the Mariachi-Flamenco ending. The track has a sombre vibe so good that it wouldn’t sound out of place on Nergal’s Me & That Man Project. Ending on the Skynyrd vibes of ‘Take Some Whiskey Home’, ‘Pantomime Villains’ is as much fun as you can have with your clothes on and should have even the most cynical of cynics squealing with delight. Squealing like a pig too obvious? Maybe? But I’m eastbound and down with that.