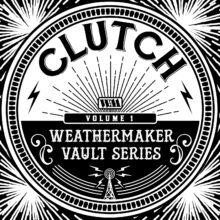 Clutch makes it look easy. They really do. Watch them at a festival (yeah, if only), no fireworks, no histrionics, just four unassuming dudes that quietly plug in and go about the business of making some of the best, and grooviest rock and roll around today. And they have been doing so for decades now. Their back catalogue; the envy of many other bands. And it’s from this magical well of top choons that ‘Weathermaker Vault Series Vol. I’ is culled from.

Previously available as individual digital-only tracks through Weathermaker Music (Clutch’s own record label), this selection of covers and re-recorded songs from Clutch’s vast catalogue are now going to be physically available on both CD, and LP (to follow on Friday, January 29th, 2021).

A riotous run-through of ‘Passive Restraints’, which originally appeared as the title track to Clutch’s 2nd EP back in 1992, kicks in the door and makes itself feel right at home. A charged-up way to kick off the album, especially since Randy Blythe from Lamb Of God is on hand to play the part of Randy Blythe. Damn, it sounds so good when cranked up! Live-favourite ‘Electric Worry’ is up next and it’s an altogether more stripped back version than the one that first appeared on the ‘From Beale Street to Oblivion’ album. The fat organ sound is gone, as is the harmonica, and the handclaps, although the drum solo from Jean-Paul Gaster is still present and correct. The track sequencing is perfect and ‘Electric Worry’ almost bleeds seamlessly into a fuzzed-up, trippy version of ‘Run, John Barleycorn, Run’. The bass lines from Dan Maines steal the show on this one; truly, truly, magnificent – and, all part of a track that could be vintage Black Sabbath.

If it’s Maines that steals the show on ‘Run, John Barleycorn, Run’, then it’s the sublime guitar work from Tim Sult that takes the crown on the (still) uber-trippy ‘Spacegrass’. Is it really 25 years since Clutch originally released this one? Yes sir it is, and it’s still one of the ultimate soundtracks for a trip on ‘shrooms. Sult’s guitar tone on ‘Smoke Banshee’ is towering, and Neil Fallon’s vocals haven’t dulled in the 19 years since the band released it on the ‘Pure Rock Fury’ album, if anything his vocals have got deeper and earthier. A lush reworking of ‘Willie Nelson’ (the backing vocals are sweet nectar) is the last of the reworked Clutch tracks, and a fine way to bring the album to an end.

The cover versions are nutty, good fun. The Willie Dixon/Cactus cover ‘Evil (Is Going On)’ is first up and begins like a Zeppelin-meets-Rush mash-up. Neil Fallon proves time after time why he is one of the most respected and revered vocalists around today, and this is him at his very best. Tim Sult is on fine form as usual as he delivers a performance that should have others studiously dissecting it to see how he manages to make it sound so easy. The Creedence Clearwater Revival classic ‘Fortunate Son’ gets the Clutch treatment and the Maryland quartet does a fine job on one of those classics that many attempt, and sometimes slip up with. No chance of that here though. ‘Algo Ha Cambiado’ is the shortest of the ten tracks on the album. A two-minute cover of a track by legendary Argentine guitarist Norberto Napolitano and one where Fallon pays his respects by performing it in Spanish. A larger-than-life performance on a track from an artist who meshed many styles together, including; blues, punk, and metal. The last of the covers is a killer rendition of ZZ Top’s ‘Precious and Grace’, complete with an almighty shimmering guitar tone from the mercurial Tim Sult.

In all honesty, regardless of whether or not you downloaded these tracks individually when they were first released, the option of having them as one 10-track body of work should be too good to resist. For, in your hands, you will have the ultimate party playlist tailor-made for a quiet night down at the Double Deuce before Dalton got hired.

As Neil Fallon exclaims on ‘Passive Restraints’: CAN YOU DIG IT?! – yes Neil, yes we can.