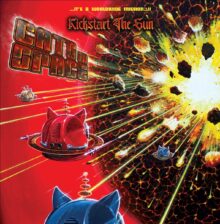 With plaudits for 2020’s ‘Atlantis’ still ringing in their ears, UK rockers Cats in Space have built on what they achieved with their first album with Damien Edwards handling lead vocal duties and raised the stakes considerably. ‘Atlantis’ is an incredible album and many Cats fans would be forgiven for thinking that it couldn’t be beaten, but ‘Kickstart The Sun’ goes one better and tops it. The decision from the band to go with a mightily ambitious double album was a bold one, but as Del Boy would say: “He who dares, Rodney, he who dares”. The most extraordinary aspect of ‘Kickstart The Sun’ is that at no point does it feel like a 60+ minute album. It’s escapism not heard on this kind of cinematic scale since Pete Townshend delivered ‘Quadrophenia’ and Jeff Wayne birthed ‘War of The Worlds’. It’s easily digested in one sitting, although there are some key moments that will have the listener wearing out the replay button.

The majority of the column inches surrounding ‘Kickstart the Sun’ will probably focus on three outstanding tracks in particular; first up is ‘King of Stars’, after the short intro – and the first of three parts – of the title track, ‘King of Stars’ lands with seven minutes of melodies and vocal harmonies to-die-for, guitar riffs and power chords up the wazoo, and a real live brass section (not merely downloaded from t’internet) that will have you making a loon of yourself as you try and imitate the triumphant horns throughout. The vocals from Damien Edwards are simply magnificent (as they are throughout the entire album), and as far as opening tracks go, this is one of the best. Seven minutes? Pah, it flies by. Then there is the title track itself. Consisting of three parts, at the album’s beginning, middle, and end – the intro, the song itself, and the reprise – this is inventive storytelling of the highest order. Soaring, majestical guitar riffs (and two guitar solos full of gorgeous tones) on a track that constantly ebbs and flows, and seems so organic and unforced. The light, subtle keyboard strokes from Andy Stewart enhance the track as they always do, and Edwards is in untouchable form; listen out for that lengthy note he holds towards the end – utterly showstopping. 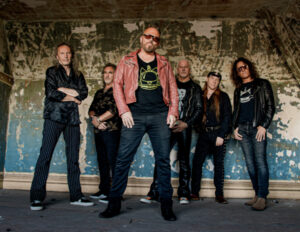 The last of the three big-hitters, and the best thing that Cats in Space has produced to date is ‘Bootleg Bandoleros’. Coming in at eight minutes in length it is bold, brave, and herculean. The short, light intro gives way to a beautiful acoustic guitar tone and Edwards begins to set the scene. The acoustic guitars are crucial to the early stages of the track, as are Andy Stewart’s synths, and the nailed-on work of the spine of the band; drummer Steevi Bacon and bassist Jeff Brown. Nearly four minutes have elapsed and then the electric guitars from Greg Hart and Dean Howard come in with a heady mixture of Townshend and Blackmore-like tinges and the listener is up out of their seat applauding and cheering like Meryl Streep in that overused Oscars GIF. But what Cats in Space excel at is surprising the listener and not going for the obvious; once the electric guitars come in at four minutes it shapes up for a big, brash midsection, but instead, they dial it back down a notch for another minute or so, and THEN they really go for it and increase the volume and power with lengthy guitar solos that should have guitar-heads everywhere slack-jawed. Special mention to the boot-stomping finale brought to you by a group of die-hard Cats fans who visited the studio during the recording process – top work! 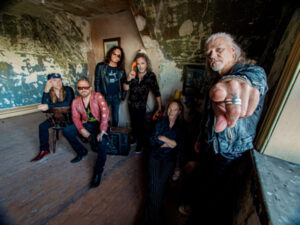 Surrounding these three major league contenders are another ten tracks of the highest quality, choice picks would be; the jaunty Foreigner-like ‘Poke The Witch’, the total glam-tastic riot that is ‘Teenage Millionaires’, ‘Goodbye To The American Dream’ which sparks some memories of late ’70s/early ’80s era Billy Joel, the sheer joy of ‘Charlie’s Ego’ which also features The Duchess herself Julie Maguire, and the Def Leppard-sized vocal harmonies of ‘Smoke & Mirrors’.

‘Kickstart the Sun’ is a testament to a band staying independent and retaining creative integrity, but theoretically speaking, can you imagine the look of bewilderment from a jaded label head when head Cat Greg Hart casually mentions that the new album is a 60+ minute offering so extravagant that it’s going to be a double? Christ, the chilled coconut water would be spat out along with the words “Who do you think that you are? Iron bleeding Maiden? No one makes a double album anymore”. Well, Cats in Space have indeed made a double album, and a total feast of music awaits the listener once they press play (or if wax is more of your bag – drop the needle).

Cats in Space have a massive self-induced dilemma now: how the hell do they put a setlist together without bordering on a set of Springsteen-like running times? What the hell do they leave out? There are at least eight tracks on ‘Kickstart The Sun’ that will be knocking on Greg Hart’s door come 3 PM on Saturday afternoon saying “Put me in the starting line-up, Guv”. Expect this one to feature in a lot of end-of-year best-of polls. Top three for sure.