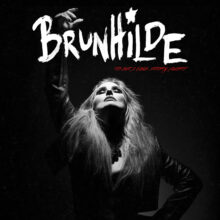 After releasing a four-track teaser last year in the shape of the ‘Choir Boy’ EP, the German duo of vocalist Caro Loy and guitarist Kurt Bauereiss, collectively known as Brunhilde, make good on the promise shown on ‘Choir Boy’ and return with a full-length platter: ‘To Cut A Long Story Short’. Hailing from Bavaria, the duo plays a heady brand of high-energy alternative punk-n-roll with some metallic edges thrown into the mix. You wouldn’t expect a band with such a mythical, warrior-influenced name to play pop, would you?

With Caro’s throaty, mess-with-me-at-your-own-risk vocals, comparisons to artists such as Taylor Momsen, Maria Brink, and Courtney Love are quite common, and after a few run-throughs of the album, it’s easy to grasp why. Moments like ‘Hell or High Water’ possess the same sense of unpredictability that The Pretty Reckless sometimes pack (love the creepy child-like vocals from Loy during the bridge mid-song), while ‘When You Were Born (I Was Already Dead)’ and the unstoppable ‘Where Are You Going?’ both harness that same lightning-in-a-bottle dangerous energy that made Hole an unmissable live-act. You might even go one step further and suggest a comparison with Lady Gaga herself, especially on the full-throttle, head-bobbing ‘Judas’ – a track that rattles along at a fair old pace, and blows the cobwebs off thanks to some stellar riffage from Bauereiss.

The neck-muscles get a decent workout on moments such as; ‘In My Head’ which has a killer groove-metal vibe in places, the staccato guitar-fuelled ‘Come Out, Come Out’, the Volbeat-tinged ‘I’m Crying’, ‘Choir Boy’ – which has great glam-punk energy, and a totally insane cover version of the Nina Hagen punk classic ‘So Bad’. But for all the full-force energy, and there is plenty of that, one of the highlights on the album is closing track ‘It’s All Lies’. As raw and stripped-back as it gets, it’s just Caro Loy and a piano, with some subtle string arrangements towards the end, zero vocal gymnastics on a stop-you-in-your-tracks moment.

Great songs, great production, great sound, all make for a great album. Play it loud though, you won’t be bored.

Previous Mason Hill: Debut Album ‘Against The Wall’ Out Now
Next Weekly Singles Round Up