“Arena-ready rock that proves the power of persistence” (Louder)

“The music really does the talking. The excellent DNA is powered by enough energy to light up the national grid!” (Metal Hammer) 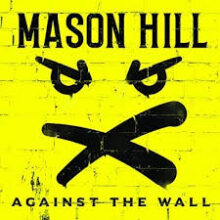 The wait is finally over! Critically acclaimed Glaswegian rockers, Mason Hill, have today unleashed their debut album “Against The Wall” via 7Hz Recordings (ADA). The album is available on CD, an incredible 5 limited edition 12” vinyl format versions including a Black 180g, Red, Blue and Yellow colours as well as a ‘Blue Face’ album artwork picture disk and via digital services Order Here

To celebrate the release, the band have a slew of activity taking place this week including a New Wave of Classic Rock (NWOCR) acoustic live FB stream on the evening of Friday 5th March and a full electric live stream show with special guest appearances on Saturday 6th March. In addition, they will also perform virtual instore signings /3 track acoustic sets at Crash Records Leeds on 9th March and Assai Records Edinburgh on 10th March not to mention a Steelhouse Festival Instagram takeover, on 8th March.

Last week the band gave fans another taste of the album when they released the single “Broken Son” along with a special lockdown video performance which you can Watch Here and Listen Here.

This followed on from their explosive last singles “D.N.A”, “Find My Way” and “Against The Wall” all of which received support across the board including over 600,000 streams as well as support from the BBC Radio 2 Rock Show, Planet Rock radio playlists, key rock magazine coverage and radio station support in Germany and France, including over 1400 European airplay spins and a top 6 in the German classic rock airplay chart – no mean feat for a band debut album release!

Lead singer, Scott Taylor, has said of the track: “We’re thrilled that our debut album is finally released. It’s been a hell of a journey with plenty of bumps along the road but we couldn’t be prouder or happier right now. So many people have supported us throughout and the realisation of this moment is a testament to the power of real rock fans out there. We thank you all from the bottom of our hearts and look forward to seeing you down the front soon!!”

Mason Hill’s debut album has been a long time in the making and was recorded in November 2019 at Riverside Studios in Glasgow, with singer Scott Taylor later travelling to New York to track his vocals. Acclaimed rock mixer Chris Sheldon (Biffy Clyro, The Foo Fighters) took the helm for the mixing and the album has been extremely well received by the critics.