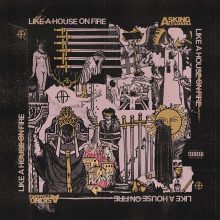 Asking Alexandria return with their sixth full-length album; ‘Like A House On Fire’, but a more apt title might have been ‘Zero Fucks Given’. Chances are that you could listen to an album a day for the remainder of 2020, and you wouldn’t find one as dancing-to-the-beat-of-its-own-drum as this one. That might sound an alarm that ‘Like A House On Fire’ is self-centred, but to be honest, aren’t all albums supposed to be just that? As soon as a band, or an artist, starts pandering to keyboard warriors and what they think that an album should sound like, then the battle is lost.

Length-wise, Asking Alexandria has created a monster of an album. Fifteen tracks with a combined running time of just shy of an hour. But drop mis-fires like ‘All Due Respect’ and there is a leaner album in here somewhere, but as alluded to above in the introduction; Asking Alexandria doesn’t really care. Will the hardcore AA fan care though? That depends on whether or not they have grown at the same rate as the band. If the 2017 self-titled album didn’t do it for you then chances are that ‘Like A House On Fire’ will have the same effect on you. Hanging around for a return to the metalcore days? Nope, move along folks, nothing to see here. But, once the listener gets past this then there is much on album number six to enjoy.

Even though there is more of an arena-filling Fall Out Boy-meets-Panic At The Disco sound on ‘Like A House On Fire’ (‘In My Blood’ especially), there are still plenty of killer riffs to enjoy, especially on ‘One Turns To None’ and the heaviest moment on the album; ‘The Violence’. Opening track ‘House On Fire’ is a strange hybrid of Maroon 5-esque pop sensibilities, hints of electronica, and a fleeting dash of power courtesy of the pounding towards the end of the song. It perhaps shouldn’t work, but remarkably it does. ‘They Don’t Want What We Want (And They Don’t Care)’ is a stellar example of what a modern American rock track sounds like, although it does come via Yorkshire. ‘Down to Hell’ has so much going on that it makes the head spin. The kind of track that fans of Fall Out Boy might dig until the screams from Danny Worsnop come in, and it’s great to hear drummer James Cassells putting in a shift, as well as some neat down-tuned guitar licks from Ben Bruce. Somewhat surprisingly the standout track on ‘Like A House On Fire’ is perhaps the most commercial and un-Asking Alexandria-like. With a slight hint of R&B, the ballad-esque ‘I Don’t Need You’, featuring Grace Grundy on guest vocals, is the work of a band comfortable within their own skin and determined not to be restricted by what a “rock” band should sound like. Again, zero fucks given by the band.

‘Like A House On Fire’ is packed with plenty of bangers tailor-made for the American amphitheatre season, sadly it looks like that no audiences will get the chance to hear them anytime soon.