Tarah Who? are a power duo made up of Tarah G. Carpenter on vocals and guitar, and Coralie Hervé on drums and backing vocals. Playing their own fiery brand of raw rock/punk/grunge, the duo will shake loose the fillings in your teeth and new video ‘Pantomath’ will soon have you swinging a baseball bat like Negan on speed. Here’s the lowdown on Tarah Who? from Tarah and Coralie…. 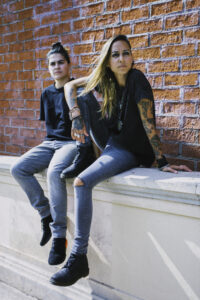 CH : My name is Coralie and I’m the drummer of Tarah Who? . I joined the band 3 years ago.

TGC: I am Tarah, singer and guitar player. I started the project in 2006 when I moved to Los Angeles. It was more of singer songwriter type of thing until I started looking for musicians. I met Coralie about three years ago. We clicked right away. Here is the story of how it all started: https://youtu.be/dQ9NKu6ta0E

CH : I think my first show with Tarah Who? was at the Viper Room, I was pretty nervous (I still am before every show hahaha) but it went really well and it was awesome!!!

TGC: First gig as a singer songwriter… let’s see. I was really shy but for some reason I kept doing it and going back. As a bass player I was never really nervous because I had the experience of Tarah Who? and I was not fronting so… I actually really enjoy playing the bass in bands not only because I love the bass guitar, but also because I am still playing music but I don’t have nearly as much responsibility as for Tarah Who? so in a way I am on “vacation” When I play drums, depending on the project and situation, I can get a little nervous. Usually, If I am prepared enough, I am ok… today, I don’t get nervous at all before a Tarah Who? show, however I do like my quiet time or just being with Coralie and getting in the zone.

CH : We are a heavy/loud/raw band, I’ll say that we are a mix of rock/punk/grunge but at the same time we have our own sound.

TGC: They should expect to see 2 mellow chicks off stage who do not hesitate to let it all out on stage. 90% of the people who meet us before a show expect us to play soft. They watch us play and they totally change. We hear a lot; “you are only 2 on stage but you sound like you are at least 6!” We save our energy for the shows 🙂 Musically, I am a big 90’s fan so if you like fast paced guitars, hard hitting drums and authentic raw rock.. then you will appreciate us 🙂 We don’t try to fit in or look cool, we just want to plug in (or sit behind the drums;) ) and play. 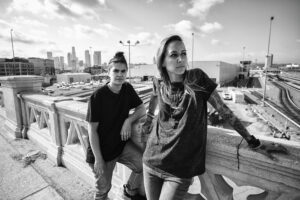 TGC: It’s difficult. On one side, thanks to social media, we are able to reach people we can’t necessarily travel to or able to meet in person, on the other hand, because it is available to everyone, anyone can start a band and make a new profile out of it. To stand out, you need to come up with some idea that will make the video viral.

I get really excited when I see a band that I like or I like the music and who comes up with something truly original to stand out. The truth and the matter, however is the ability to expose your product (video-song) you can make the best video, if no one watches it… it will just die out. Everything has a momentum and you need to utilise every second of it you have before it dies.

It is not just about talent these days, it is about being seen with your talent. Bones UK I think is really really good at marketing themselves. During COVID they played a show in a parking lot, with masks on, Drive-in show. You may read this and think they are not the only ones. Fair enough, but I like the way they have done it, and how they promoted it. Of course they have the support of the label who pushes everything that they do, and that is what makes the biggest gap between independent artists and signed bands.

TGC: Now that the music video has been released, we are going to focus on the release of live sessions. In the meantime, I am getting some new songs ready for a recording, hopefully in the fall 2020.

TGC: I have always thought that we would be a good opener for Dead Sara. They are a little more on the RATM side in my opinion so their slower, heavy tempo is perfect for our punky/grunge fast paced guitars.

TGC: Well I hope us 😉 , our friends YUR MUM from the UK, or maybe BALA from Spain. 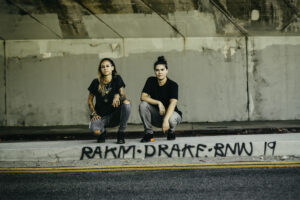 CH : I don’t really remember my first musical memory but there was some family friends that showed me AC/DC, Guns’N’Roses and it was the beginning of my rock/heavy/metal time.

The band the made me want to do that is Nightwish for sure, my favourite band and I saw them for the first time when I was 17, I will never forget!!

TGC: Listening to the Pink Floyd, Rolling Stones, Tangerine dream etc.. with my mom, and discovering music with my mom. BLASTING Rock’n roll and laughing about it. I was drawn to the drums. I don’t know why? but I have always been fascinated with the drums so I started taking a few lessons, but my dad was not into it so I had to pay for my lessons. I was 14 and didn’t have any money. I was able to go to 2 lessons before they figured out I didn’t have any cash. Then I taught myself and joined a band. I had a band in which I played the bass and another one I played the drums. I did that for a few years and we played house shows mainly because of our young age, and later we started playing bars. Later came the guitar, just because I was in Kentucky and I didn’t have a drum-set there. That’s when I started writing songs. I have never thought about music as a career it just became what it is today, I just can’t see myself not playing. I am miserable when I don’t play.

CH : I went to see Sabaton, a Swedish metal band, in Los Angeles, it was amazing !! I loved it!!

TGC: I think it was Brody Dalle in Manchester. We got to hang out after the show and that was very very nice!

TGC: releasing a few more videos, new ep and get back on the Road as soon as we are able to! 🙂

TGC: We are both really active on instagram. I am not really good (personally) anywhere else. I can’t stand messenger, I don’t understand twitter. So If you try to reach out on those, it won’t be me or you will get no answer. Instagram is your best bet. @tarahwho – Facebook here