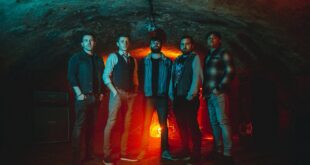 Bournemouth based South Of Salem have just released their rather special debut album ‘The Sinner Takes It All’, and frontman Joey was on hand to answer some questions fired at him regarding the album, as well as the birth of the band, social issues he feels strongly about, and the albums that the band have in their private vaults which might surprise people. Pip’s choice of Patrick Stewart’s Cowboy Classics should have everyone quickly searching YouTube to check that it does in fact exist. Well, it does exist and by Lucifer’s beard, it is as cool as it sounds… 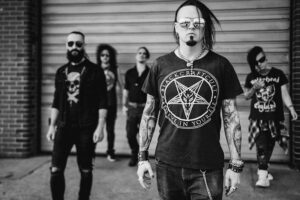 We officially formed the band back in 2018. We had worked together on various different projects over the years, but never all together at the same time. Most of us have known each other for over a decade, through the local music scene and local bars. During those initial conversations, it was clear that the time was right and we had a shared vision for what we wanted to create.

It was incredible. It was a sold-out show in our hometown and the audience was amazing. We’re a live band, it’s why we do this and it was a great payoff for all the work we had done to that point.

I think be unique, be bold, and have a professional product in every way.

Debut album ‘The Sinner Takes It All’ has just been released, what was the album gestation period like? And who came up with the brilliant album title and cover art?!

We knew what kind of sound we were after and did a lot of research into different producers. Following his work with bands like Cradle of Filth and Behemoth, we felt that Scott Atkins at Grindstone Studios was the clear choice. Scott was incredible to work with. He not only shared our love for 80s Rock and Metal but he truly drew the best performances out of all of us. It was intense, it was hard work but it was great to see these songs come to life.

It was myself that came up with the title and cover art. It’s obviously a play on the 1980 ABBA hit, ‘The Winner Takes It All’. I just felt it suited the band’s aesthetic, but also mirrored the journey we’d all been on, navigating the music industry and the mental challenges that come with that. The cover photo was taken by our good friend and professional photographer, Scott Chalmers. I wanted it to be a twisted take on the biblical story of Eve and The Snake. 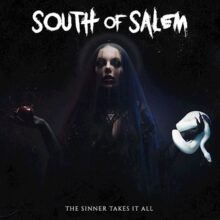 It truly is stunning! Now, ‘Demons Are Forever’ seems to be a very personal track? Who wrote this one?

I wrote that one. I’ve always been very open and honest about my feelings no matter how dark they can get. It’s about the everlasting effects of mental illness and one of my favourite tracks on the album. When I demoed that track, I felt it was going to be something special but Kodi’s guitar solo and the keys added by The AvD (Red Method & The Defiled) took it to a whole new level.

Personally, my favourite track changes all the time and I know the guys have the same struggle picking a favourite. It’s an impossible task.

‘Let Us Prey’ is inspired by the Purge movies I believe? Judging by the way that 2020 is going, these movies soon won’t be an act of fiction?!

Yes, the original inspiration for the lyrics was The Purge movies. Although they did evolve slightly during the writing process, we kept the Purge theme for the music video. 2020 has been a weird one, that’s for sure and there have certainly been days I’ve felt I’m in some Philip K. Dick dystopian novel. Hopefully, things will get better soon and The Purge won’t become reality.

The incredible reviews we have had so far have compared us to a wide array of bands, so I feel there’s a plethora of bands we could open for. I’d personally love to open for Alice Cooper or Guns N’ Roses.

Red Method are great guys and Alex (The AvD) is a good friend. They will surely be making even bigger waves when the world returns to normality.

Joey – For me, it was my dad’s 40th birthday. I learned his favourite song and performed in front of everyone at his party. I knew then I had a love for singing and performing to a crowd.
Pip – Seeing Iron Maiden live for the first time made me want to play drums in a Rock band.
Dee – The first time I saw Alice Cooper live.
Fish – Seeing Status Quo live as a kid.
Kodi – My first musical memory is when Marty McFly plays Johnny B. Goode at the end of Back To The Future. I immediately started washing my entire neighbourhood’s cars to earn money for a guitar.

We have sadly lost a lot of friends to suicide over the years, so I’d probably say mental health and suicide awareness is up there, especially with the world as it is. For the ‘Demons Are Forever’ music video we actually invited our fans to share their tributes to lost loved ones and messages of hope from survivors of suicidal thoughts.

It’s a tough one. I think it depends on the message. For example, we would never condone a band that preached hate or racism. I think of music as an escape and personally don’t listen to overtly political bands but if a band’s music highlights social injustices then I’m okay with that.

Personally, for me, it would be Chibi, Rainbow, and Falcore from The Birthday Massacre. I’ve never felt they’ve had the success they deserve.

We want to keep growing and hopefully get some tours booked for 2021. We’ll be releasing another music video before the end of the year, that’s for sure and maybe doing some live streaming along the way.