Based in Edinburgh, multinational electro-grunge trio Rénovations have been described to have a “stadium-filling sound” (BBC Introducing). The band takes inspiration from the likes of Enter Shikari, Hands Off Gretel, and Mademoiselle K. The trio release their new single ‘I Feel No Pain’ on January 29th and we spoke to vocalist/bassist Charlotte about the single, as well as how the trio met. Band-mates Gian (drums), and Ioana (guitar) join us towards the end to talk about their own personal musical memories. Get acquainted with Rénovations below. 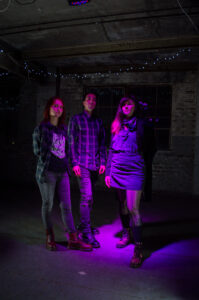 What are the origins of Rénovations? How long had you known each other before forming the band?

Rénovations started with a jam on a night of summer 2016, at Whistle Binkies [famous Edinburgh pub], where all musicians in Edinburgh used to gather every Monday, I remember it was summer because we ended up jamming on Hunter Square until the sunrise!!! Me (Charlotte) and Gian with his brother Andy have met on that occasion and we had a couple of projects in common before knowing Ioana in 2019, when Rénovations began.

What should people expect when they check the band out? How would you describe Rénovations?

They should expect some electro-rock and some good vibes, it’s almost like family, we love playing together and the energy coming out of this is something we like to share with people.

I would also describe it as a deep friendship and a power trio, we’re just 3 and we can be very loud, that’s the idea of the project, we want to give some love and some “quality noise”.

Although the band is new and working within lockdown restrictions, you will release your third single ‘I Feel No Pain’ very soon, what was it about this one that made you choose it as a single? And what are the lyrical themes behind it?

We felt that the song is coming after the previous two singles quite nicely. It mixes airy melodies as the first single and some more grunge vibes from the second one. It is representing very well the style of the music that we do. Among the 4 other songs on the upcoming EP we have a bit of heavier tunes and also a couple more atmospheric ones.

The lyrics of “I Feel No Pain” are related to someone who’s finding himself to be asymptomatic during a pandemic. Realizing that he’s lucky to be healthy and that the world is still going despite the crazy situation and the millions of deaths. It is also about the selfishness of human beings always thinking about their own selves before others (virus’ spreading). 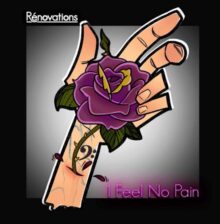 Yes we’re both, we never know how people are going to react, there are so many amazing bands out there; what if our releases are not good enough?

Actually, it’s always a challenge to create a tune and achieve it to the release point! We’re putting quite a lot of pressure on ourselves so it will sound the best as possible while recording, mixing, mastering; everything is important. That includes its promotion and we’re learning with every single release what works in terms of creating buzz and what doesn’t.

The artwork for the single is stunning! Who came up with it? And, is it inspired by Gorillaz?

Charlotte: Thank you so much, I had the idea in my mind a few months ago, inspired by the themes of each song in the EP. Then I’ve described it to a friend illustrator/graphist, named Tahnye (also from France), and asked her if she was keen to give it a try, and that’s what it became, as simple as this. She has been indeed quite influenced by Gorillaz artworks in the past as an artist.

In what ways has the band developed since releasing debut single ‘Renovations’ last year? For instance, do you see growth in the song-writing department now that you have a few singles under your Belts?

We were actually having this conversation very recently about lyrics and we told ourselves that the messages of our future songs are going to be more specific and story orientated. We will try to target one precise subject in each tune, something that is important to us individually. Also, the style of our music is getting more and more elaborated and personal, we’re finding ourselves into our music, which is a nice feeling.

With band members from France, Italy, and Romania, as well as being based in Edinburgh, you all must be proficient in cursing in multiple languages!

Yes, we’re trying to share our languages between us, especially during rehearsals, but when it’s serious we’re just sticking to English! Nonetheless, we should compete and see who can get the most proficient in one of our languages at swearing, visit our home countries and embarrass each other. The most embarrassed bandmate loses.

In terms of a similar audience: who would be the ideal act for Rénovations to support? 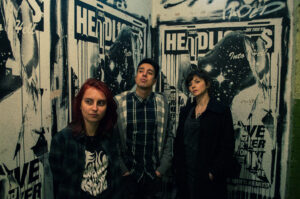 Charlotte: I was learning piano at the age of 15 and my teacher at the time was a metalhead (I was too) he dropped a bass in my hands one day saying that it would be nice for me to play bass. A few months after I bought my first Ibanez bass from a cheap offer in a local music store and back home I was playing while listening to music (every single day). I got used to playing everything I could by ear.

Gian: It was during high school when I was 16 years old. Just before the end of a lunch break, I was tapping the desktop with my hands, then going louder thinking about some Nirvana tunes. Up to that point, one of my friends saw me and laughed. Then he went “Oh Gian, you should be a drummer!”.

Ioana: One of my friends and I back in Romania would go in the summer to see this Peruvian band, Sin Fronteras. We went so often that we learned their set and choreography, and once we did we would perform in front of our parents. Maybe that was a lightbulb moment without realising! I must have been around 8 years old.

Charlotte: My first bass teacher: Geoff’! Also my parents, they always pushed me to do what I loved. Then the Beatles, they made me a singer! 🙂

Gian: Again in 2004, Luca Lobefaro, my first drum teacher. He gave me all the right inputs, alongside my passion for rock music and other genres that defined who I am right now.

Ioana: My dad introduced me to Led Zeppelin and from then I wanted to learn to play guitar. Two years later I was introduced to Green Day, who inspired me to start a band and write music.

Charlotte: Cory Wong at Queen Margaret Union in Glasgow on the 20th of February 2020

Gian: Enter Shikari – Barrowland at Glasgow 23rd of January 2019. Such a bombastic show!

Ioana: Steel Panther at the O2 Academy, Glasgow – After we got to the venue I learned that I just missed meeting their frontman, Michael Starr! 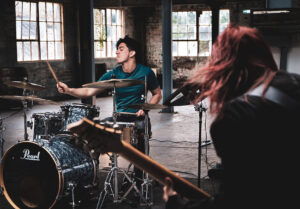 We all have hope that one day Scotland will achieve its independence and rejoin the EU. As immigrants, we are grateful to have been made to feel welcome here, and again when the Brexit result in Scotland was to remain. Naturally, the overall election result was a ‘brick to the face’ for gigging/touring musicians, not to mention the highly mismanaged pandemic by Westminster. We will eat our hats if we are wrong, but we are sure that independence will open the door again to mainland European musicians and in turn, it will help grow the Scottish music scene as soon as we can see the live music industry come to life. You can expect to see more of those themes appear in future songs.

Gian: The Machine by Huxley. Yes, I love House/Tech music.

Ioana: Probably ‘New Rules’ by Dua Lipa – I have a soft spot for any absolutely amazing pop songs.

Gian: MMXX by Eskimo Callboy, a German metalcore band I discovered this year.

Ioana: Take It Personally by Oliver Wardell – The songwriting is just so powerful. It inspires me in terms of the direction I could take punk rock/rock-orientated songs. 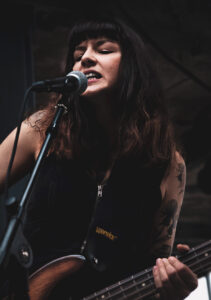 Charlotte: Eiffel, Mademoiselle K they are both French bands that I follow since I’m a teenager and their music is like poetry and they are the biggest influences on me.

Gian: Bryde. Welsh songwriter. She really caught my attention back in 2017. In all the songs she sings, she means everything she says: her concepts, mindsets, human behaviour. Absolutely stunning performer and definitely deserves more.

Ioana: The Belgian band dEUS – Their debut album Worst Case Scenario was hugely inspirational to me when I started writing music. It’s just so chaotic, I mean you can imagine if I tell you that they are ‘grungey’ but with a violinist as a core member.

We would love to play gigs again (as we only had a couple of opportunities before the virus) and see how the scene will be like with everyone looking forward to seeing some live music again, it will probably be a riot! (hahaha)

We post on social media at the very least once a week, in order to try to create a bit of a buzz and maintain it. Every day we are keeping an eye on all our socials (Facebook, Instagram, Gmail, YouTube, and Twitter) and taking care to reply to every comment/email as soon as we can. We are keen to build and grow a little Rénovations community, for two reasons. Firstly, having people react and comment on our work makes us feel less isolated in a way given that we have been working together mostly remotely. Secondly, we hope that we will get a chance to meet the people we are getting friendly with as soon as gigging/general socialising can see some form of normality. With all that being said, we encourage anyone who stumbles upon Rénovations to even just send us a message on Facebook/Instagram/Twitter and say hello!