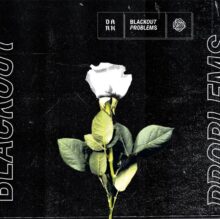 If you were savvy enough to get down to the Royal Republic European tour/disco/party-night in Winter 2019, then hopefully you were savvy enough to get there early enough for opening act Blackout Problems. In terms of sheer energy, the German alt-rockers gave the headliners a run for their money and came away with scores of new fans tucked under their arms. In lieu of getting back onstage whenever it’s safe again, Blackout Problems deliver their third album: ‘DARK’, an album that certainly lives up to its title.

Although ‘DARK’ is the third album from Blackout Problems, it’s their first on a major label, Sony Music worldwide and partnering with legendary label Music For Nations in the UK. It’s always a thrill seeing the name Music For Nations attached to a new band, such a groundbreaking label. Blackout Problems are one of Music For Nations more alternative acts, the aggression is still there and the band packs a hefty wallop or two, albeit with an electronic edge. The album “…reflects the band’s response to some of the alarming headlines of recent years, including the resurgence of right-wing forces and the worldwide triumph of populism”, and the tracks on offer deal with ignorance; anxiety; emotions, and hopes and fears. With a title like ‘DARK’, it was never going to be an “everything is alright-alright-alright” album. This is Blackout Problems wearing their hearts on their sleeves, so much so that there is an accompanying in-depth documentary – ‘DARK DAYS – THE DOCUMENTARY’ “which focuses on the creation of the album and the current state of being in a band and living life in Germany, and indeed Europe, today.”

‘DARK’ is a staggering, lengthy affair, 13 tracks with a combined running time that near-hits the 50-minute mark. It’s a rollercoaster ride of anger and emotion, which many today will identify with. Opening track ‘MURDERER’, for instance, could be a call-to-arms/tirade relevant in most countries today. The pulsating, synth-heavy track poleaxes with frontman Mario Radetzky acting out both sides of the current state of affairs worldwide, dealing with people who have been brainwashed by misinformation fed to them through social media: stating that “the best politician is a dead one…” before later offering up hope and reconciliation with “you say the best politician is a dead one…I disagree…”. All played out over a simple guitar tone and gang vocals spelling out “R.E.S.P.E.C.T. and L.O.V.E. for everybody”, over and over. It’s a powerful few moments, especially since it was written before the recent scenes of madness unfolding in the US Capitol, and tales of home-grown terrorists carrying cable-ties to kidnap politicians. ‘BROTHER’ follows on with a faster tempo and a killer chorus. The track deals with relationships and friendships, and how it’s never too late to re-connect with someone you’ve lost touch with, the line “…still broke as fuck…” raising a wry smile from everyone counting down the days to payday.

‘GERMANY GERMANY’ is one of the cornerstones of the album. A tale of the dangers of the rise of the ultra right-wing, and with lyrics like “Don’t go back into history/Your walls, your anxiety/See what they’ve done to me/ Germany, Germany.” followed by ”We kidnap your children/We sleep with your daughters/Take all of your jobs and/Destroy monocultures” and ”You’re no lords; you are liars/Why did nobody stop you/From getting addicted/To the wrong kind of sickness” this is Blackout Problems painting a bleak picture. ‘LADY EARTH’ is another cornerstone. Inspired by teenage eco-activist Greta Thunberg, the track deals with the strength Radetzky gained from teenagers and the younger generations around the world becoming more active in the world that they have inherited. The track offers light and hope, to counteract the darkness elsewhere on the album.

The album title and all of the 13 tracks featured are all in capital letters for a reason: Blackout Problems are making a powerful statement. It’s a brave, experimental album, and one that is obviously deeply personal. It can be quite raw and uncomfortable at times, but that could be said about the world that we live in at the moment.