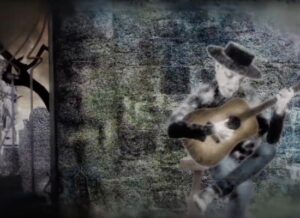 Egomunk has released the video for his new song ‘Radio Hum’. The video finalises a trilogy of visuals to accompany the recently released Only One EP.

‘Radio Hum’ is a dark unnerving track which builds through a blend of pulsating beats and interchangeably brooding, dissonant and infectiously melodic guitar lines, set against half-spoken, hauntingly hollow and distorted vocals which address the battle of inner demons.

The video is a haunting animation, which has been created by Robert Beebe who has previously worked on iconic horror film Saw among others.

Regarding the release egomunk says, “‘Radio Hum’ is a song about one’s own demons and the internal voices needed to defeat them. The animation is a tale of cheeky debauchery, illustrated by Robert Beebe from Prestidigitation Film. The story is the transformation from a conga of innocence as the joyful skeletons are led astray to become hedonistic humans and their journey back home again, after being baptised by a mythical hooded figure whose purpose is unveiled at the end.”

‘Radio Hum’ is taken from the new EP Only One, which also features the single ‘Islands’, an emotional piano-led ballad laced with ethereal electronics, displaying the captivating sonic dexterity of egomunk.

‘Islands’ highlights loneliness and caring for the elderly, delivering an important message for these current times, and as such egomunk announced all profits of the single are to be donated to Age UK. egomunk spoke to Age UK about the release in an interview here.

Previous The Quireboys: ‘A Bit Of What You Fancy’ 30th Anniversary Tour
Next Introducing: The Venus Fly Trap