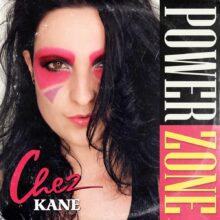 Frontiers Music Srl is thrilled to announce the release today of ‘Powerzone’, a brand new single by Welsh hard rock vocalist Chez Kane. A stunning song in its own right, it also serves as a preview of her second solo album, which is currently receiving its finishing touches and is anticipated for release in late 2022.

“I’m back to it with album no. 2 in the works and I could not be happier!” enthuses Chez. “Danny Rexon [Crazy Lixx] and I have taken it up a notch and we are so excited to give you guys a sneak peek of it with ‘Powerzone’. This song gave me the chills during the recording process and I really hope you feel the power in this song as much as I do.”

Chez’ star has been on the rise since the release of her self-titled debut album in March 2021. Produced by Rezon, it struck all the right chords with the melodic rock faithful and cemented itself as an instant classic. With ‘Powerzone’, she is clearly indicating that she is already set to jump to the next level. 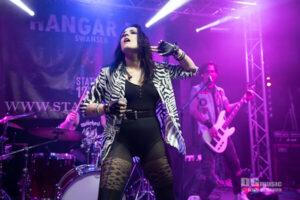 Chez will perform at the Rockin’ The Bowl festival in Sheffield on 11th September prior to a UK tour in the late autumn, several shows for which have already been announced. Confirmed dates are: 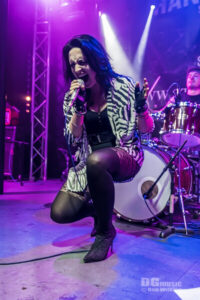 Chez will also play the All Star Fest at the Zappa venue in Antwerp, Belgium on 26th November, while January dates in Barcelona (Wolf) and Madrid (Caracol) are confirmed for 13th-14th January 2023. A little further ahead, she will perform on the Monsters of Rock Cruise in the US from 29th April to 4th May 2023.

ABOUT FRONTIERS MUSIC SRL
Originally founded in Naples, Italy in 1996 by Serafino Perugino and his father Fernando as a distribution company, Frontiers has developed into one of the premiere independent rock labels in the world. Synonymous with quality music across a broad spectrum of rock and metal genres, the company works with multiple genre heavyweights and fan favourites. However, in addition to providing an outlet for classic and established acts, it has also become home to a wealth of young, up and coming talent whose musical prowess, when combined with the label’s savvy and forward thinking A&R and marketing approach, will be developed into the future of rock and metal. With a deep commitment to and passion for THE MUSIC and the artists who create it, plus massive global distribution, sales, marketing and promotion channels, Frontiers is the leading home for both established and emerging rock and metal artists.

Subscribe to be alerted when new videos are added:
radi.al/SubscribeFrontiers
Follow the ‘Newest From Frontiers’ playlist on Spotify:
spoti.fi/1rQz5Zm