Christmas has come early for fans of The Sword. After a period of inactivity, the acclaimed band from Austin, Texas have released not one, but two career-spanning collections.

One of the most respected bands still around today, The Sword expertly meld together a heady brew of multiple genres, they are as equally at home opening for Metallica, as they are Clutch, or Opeth. If you need further proof of how widespread the appeal of The Sword is, the band should be out on the road at the minute opening for Primus on their Rush tribute tour, alongside special guests Wolfmother. 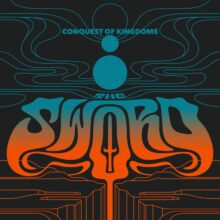 First up is ‘Conquest of Kingdoms’; a gorgeous looking triple vinyl collection (also available digitally) where 16 of the 30 featured tracks are unreleased. The first 12 tracks are all live, split between an early 2005 show, and subsequent shows in 2007 and 2011.

Drop the needle and it instantly becomes apparent how much of an influential sound The Sword created from day one. ‘The Horned Goddess’ is the perfect example of a band unrestricted by the confines of the stoner/doom metal genre. The Sabbath influence is evident throughout the album, especially on ‘Barael’s Blade’, which features some explosive Bill Ward-esque drumming from original drummer Trivett Wingo. ‘The Black River’ totally crushes thanks to the muscular riffage from Kyle Shutt and J.D. Cronise; fans favourite ‘Freya’ has some killer thrash riffs throughout, and pounding basslines from Bryan Richie; the frantic pacing on ‘Turn To Dust’ is totally unrecognisable from the slow, sludgy version that appeared on 2015’s ‘High Country’ album, and is one of those moments which make unreleased versions so interesting.

The collection features an abundance of cover versions. ‘Immigrant Song’ is rougher than a camels arsehole in a sandstorm, and totally slays; ‘She’ from Kiss gets fuzzed to the max; the bluesy ZZ Top shuffle on ‘Cheap Sunglasses is still here, but with a real trippy vibe in places; ‘John The Revelator’ delivers the money shot though, the gospel-blues of the original still present through the pacing and the handclaps, but with added riffage. Totally sublime. 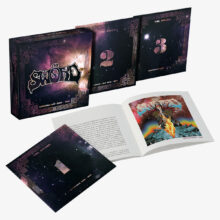 Vinyl not your thing? Then feast your eyes on ‘Chronology: 2006 – 2018’, a 52 track, triple CD career retrospective. You will find eight or so live tracks from the vinyl version here, as well as the covers, b-sides and rarities. The main difference in the tracklisting between the two versions, is that the CD version is more in depth, and features tracks from each studio album up to and including the most recent; 2018’s ‘Used Future’. As the title would suggest, the tracks are listed in chronological order; beginning with ‘Freya’ from the 2006 debut ‘Age of Winters’. It’s amazing to hear that ‘Winter’s Wolves’ and ‘The Horned Goddess’ are as fresh and intense today as they were 14 years ago. Again, the drum sound is immense.

Sophomore album ‘Gods of the Earth’ went down a fantasy-themed path, with references to fantasy writers Robert E. Howard and George R.R. Martin. Tracks featured include ‘How Heavy This Axe’ and the neck-breaking ‘Fire Lances of the Ancient Hyperzephyrians’ which is quickly followed by the sludgy ‘Maiden, Mother & Crone’. Album number three; ‘Warp Riders’ (a science fiction concept album), saw the stoner/fuzz dialed down in places, for more of a traditional hard rock feel. Pick of the bunch would be ‘Lawless Lands’ with its shimmering guitar tones, and the Thin Lizzy-esque ‘(The Night the Sky Cried) Tears of Fire’. Fourth studio album ‘Apocryphon’ has a huge sound, perhaps less technical than ‘Warp Riders’. Bassist Bryan Richie broke out the synths on the groovy ‘Dying Earth’, although it’s ‘Seven Sisters’, another far-out track from the album, that remains the high-point. In terms of sound and style, 2015’s ‘High Country’ was quite an experimental album. More “classic” rock than stoner or doom, tracks such as ‘Empty Temples’ and ‘Early Snow’, for instance, giving off a Blue Oyster Cult vibe. The collection is brought up to date with moments from 2018’s ‘Used Future’, such as ‘Deadly Nightshade’ (complete with a towering bass sound from Richie) and the laidback grooves of ‘Sea of Green’.

Both releases are hefty packages, and fans of The Sword will have a field day pouring over the accompanying booklet with the CD bundle, ultimately both serve as a timely reminder of how trailblazing The Sword are.