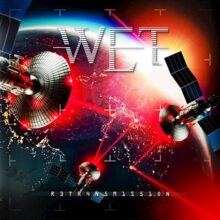 Google defines escapism as: “the tendency to seek distraction and relief from unpleasant realities, especially by seeking entertainment”. It could have saved some characters by merely saying “see the new W.E.T. album”. For, if ever there ever was a band to offer “distraction and relief from unpleasant realities” then it is W.E.T., and for 40 minutes, ‘Retransmission’ (album number four from the supergroup), provides all of the above, and then some.

For those yet to acquaint themselves with W.E.T., the band is made up of Robert Såll (the “W” from Work of Art), Erik Mårtensson (the “E” from Eclipse), and Jeff Scott Soto (the “T” from Talisman), and with Magnus Henriksson (lead guitar, also of Eclipse), Andreas Passmark (bass guitar, Royal Hunt), and Robban Bäck (drums, Mustasch) on board, they really do make this look so easy.

As alluded to in the opening, ‘Retransmission’ is a welcome distraction from the unpleasantries of an outside world that seems to be getting harder and harder to deal with each day. As soon as the first few bars of opening track ‘Big Boys Don’t Cry’ settle down, and the unmistakable dulcet tones of Jeff Scott Soto kick in, alongside the lighter-than-light backing vocals from Mårtensson, it’s akin to wrapping up in front of a roaring fire on a cold day – instant comfort and a warm, secure feeling. It sets the standard for the remaining ten tracks, in the sense that although it’s a brand new track, the listener can sing along with it instantly. That’s an amazing benchmark to aim for with new music, and W.E.T. does it with ease. ‘Big Boys Don’t Cry’ has an incredible, uplifting vibe, which coupled with Henriksson’s fine guitar work and the engine room team laying down some meaty grooves, IS what Melodic Rock should sound like in 2021. 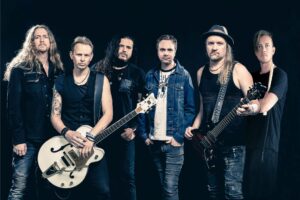 The big-ass bass rumble from Andreas Passmark pushes ‘The Moment Of Truth’ along at a lively pace, more fantastic playing from Henriksson and a killer barrage from Bäck towards the end, but it’s the stellar vocals from Jeff Scott Soto which steal the limelight. The finest melodic rock vocalist since Jimi Jamison? Hard to put forward an argument against that, but it would take someone very special indeed to shade the big man. Melodic rock as a genre can often suggest a lack of bite, guitars forsaken in the mix for keyboards or layered vocals, no chance of that here. Even on an ultra-commercial track like ‘The Call Of The Wild’ (where the quickfire backing vocals could cause a Bee Gees flashback), the guitars are all present and correct, a great mix of razor-sharp riffage and uptempo rhythms, hell, there’s even a solo. But, it’s the big choruses that people tuned in for, and ‘Got To Be About Love’ has the biggest of them all. Hooks big enough to catch Moby Dick’s bigger brother, it truly is a beast of a track which in true W.E.T. fashion, is instantly easy to sing along with.

Need something with a bit more thrust? Then the mid-section of the album will have you purring with delight; crank up the Whitesnake-tinged ‘Beautiful Game’ or ‘How Far To Babylon’ which features a hint of a Def Leppard/Mutt Lange influence; ‘Coming Home’ and closing track ‘One Final Kiss’ are primo melodic rock with some of the most infectious vocals likely to be heard this year. Want something to bring it back down again? ‘What Are You Waiting For’ and (to an extent) ‘How Do I Know’ are the big power ballads on the album, the latter does possess a bit of a bark, but yeah, perfect power ballads.

With Erik Mårtensson recently posting on social media that Eclipse is back in the studio, 2021 will belong to the multi-talented Swede. One of the main go-to-guys when it comes to production, mixing, songwriting, performing, and mentoring, Mårtensson is melodic rock’s shining star. With a very real chance of a new Eclipse album appearing before the year drags it’s sorry ass over the finishing line, Mårtensson, and Magnus Henriksson, are in with a strong shout of finishing 2021 with numbers one and two in the top ten melodic rock albums of the year. Which one takes the top spot depends on what they conjure up with Eclipse, for it’s going to take something special to top ‘Retransmission’, an album that will feature heavily in end-of-year polls regardless of genre.

‘Retransmission’ is an un-ashamed “feel-good” album. Feeling low? Blue Monday turning into a month-long prison sentence? In need of some light to counteract all the dark? Take two doses of ‘Retransmission’, twice a day, and call me in the morning if there is no sign of improvement.