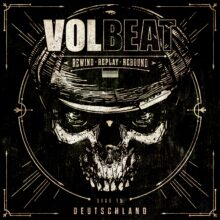 Ignoring the cardinal sin of writing in the first-person for a moment; I’ve got a friend in America, Nashville to be precise. Massive old-school rock fan. The kind of guy who caught the likes of Aerosmith and Kiss the first time around in theatres. He messages me early 2019, asking what I knew about this Danish band Volbeat as his only knowledge was that the dude who used to play guitar in Anthrax (Rob Caggiano) played in Volbeat. “…Why do you want to know?” I respond, “…well they’re opening for Godsmack and I wasn’t sure about buying a ticket”…”…wait, Volbeat are opening for Godsmack, what kind of trickery is this?”. Turns out it was true; Volbeat were going out with Godsmack, in arenas, billed as “special guests”. What followed next in the conversation was a quick history of Volbeat, how he would be an idiot to miss them, and finally, over-emphasising exactly how much of a draw Volbeat are in Europe. Especially in Germany, where this 27-track behemoth of a live album was recorded in front of their die-hard fans in cities such as Stuttgart, Cologne, and Hamburg.

Volbeat frontman Michael Poulsen himself sums it up best: “the German audience has always had a special place in our hearts, since the very beginning. They have always supported us and still do. It’s amazing to see the impact the fans have had on Volbeat, we’ve become fans of theirs, too.”

Volbeat recorded live in the band’s “second home”, with a new studio album to plug, so, naturally said album ‘Rewind, Replay, Rebound’ features heavily throughout this epic set. And it shows you how much confidence Volbeat had in the album, with 11 new songs scattered throughout the set-list. Volbeat live-staple ‘Lola Montez’ is in the unfamiliar position of opening the set and still remains a total banger to this day, regardless of where it is in the set. Then it’s into the first of the new material with the ‘Peter Gunn Theme’-on steroids, hi-octane ‘Pelvis On Fire’. The kind of track where if you are at a gig and the band strikes it up, you make a fool of yourself by busting some heinous moves. Blame it on the booze, man. If this one is hi-octane, then ‘Die To Live’ is pure rocket-fuelled mayhem. Recorded on the studio album as a duet with Clutch frontman Neil Fallon, here Poulsen plays both roles by adopting a deep Fallon-with-an-Elvis-drawl vocal style. Coupled with the “old geezers” on saxophone, and boogie-woogie piano, this is a riot. It’s fast, loose, and great fun. Exactly what rock ‘n’ roll should be. ‘Cheapside Sloggers’ (dedicated to the “fucking Peaky Blinders”) is another fine slice of mayhem and a new track that should remain in the Volbeat live-set for some time to come. Highlighting the softer, more commercial side of the Volbeat sound are ‘When We Were Kids’ where Poulson breaks out the Elvis-drawl again and the hopeful (and infectious) ‘Last Day Under The Sun’.

Making up the lion’s share of the set is what can be best described as a mixture of Volbeat’s greatest hits, and choice deep cuts. ‘Doc Holliday’, ‘Sad Man’s Tongue’, ‘Slaytan’, ‘Seal The Deal’, ‘The Devil’s Bleeding Crown’, ‘Pool of Booze, Booze, Booza’, and a soaring version of ‘For Evigt’ (a track that always raises the arm hairs): just a handful of bangers. Poulson pays homage to his heroes with a foot-stomping version of Johnny Cash’s ‘Ring Of Fire’ (complete with audience participation), as well as the always-heartfelt ‘Fallen’, dedicated to his late father. Two very special moments.

Ending on what else but ‘Still Counting’, ‘Rewind, Replay, Rebound: Live In Deutschland’ serves as a timely reminder of the potency of one of the most revered, and tightest, acts on the live circuit. Well, the live circuit when it does eventually return. As for my American friend mentioned in the intro, what did he think of Volbeat? Stupid fucker got drunk in the parking lot at a tailgate party and missed them. Duh.

The Stuttgart gig is now streaming in its entirety over on the official Volbeat YouTube page, for 72 hours only from 03/12/2020.

Previous The Rumjacks: New single – ‘Sainted Millions’
Next THE RHUBARB: New Video – ‘Drag Me To Hell’