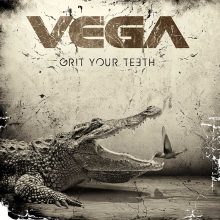 On album number six; ‘Grit Your Teeth’, Vega come flying out the traps with ‘Blind’. A sense of urgency, a statement of intent, call it what you will but this is Vega ramped up to the max. Great pacing, fantastic riffs from Marcus Thurston and the usual high quality vocals from the unsung vocalist of British rock: Nick Workman.

The dust has barely settled and ‘(I Don’t Need) Perfection’ is heralded in with a drum blast from Hutch, quickly followed by some muscular riffs from Thurston. The infectious melodies which Vega are famous for are all present and correct, with an especially catchy mid-section around the 2.30 minute mark. Again, Thurston’s guitar work is top-drawer. The title-track has a confident swagger that all title-tracks should have; the highly enjoyable, and bounceable ‘Man On A Mission’ quickly follows on and is set to be a live favourite (fantastic high vocals from Workman towards the end); ‘Don’t Fool Yourself’ is as perfect a slice of American drivetime radio as you are likely to hear from a band outside of Sweden.

And that’s just the opening twenty minutes or so.

‘Consequence Of Having A Heart’ takes the mid-album slot where you might expect a power ballad to rest, but it’s not exactly a power ballad. Very slick with fantastic backing vocal harmonies and an infectious chorus, this is a track that really grows on the listener. As Workman explains: “The song is about having the elation, but then you have the sadness, and that’s the consequence of having a heart”. ‘Battle’s Ain’t A War’ is a highlight of the back end of the album, and perhaps might steal the show. Slower in pace, but with melodies that Jon Bon Jovi would have killed for on his last few albums, and several righteous guitar solos from Thurston (hey man, Bill & Ted are trending so the use of “righteous” in 2020 is allowed). ‘Save Me From Myself’ seems to have been written with an audience sing along in mind; as does closing track ‘Done With Me’, which has one of those killer choruses that begs for audience participation, and a hey-hey-hey section just waiting on this plague to pass and gigs to return.

Given their metal credentials (Asking Alexandria for instance), the choice of the Graves Brothers as producers might have seemed an odd choice on paper. But in reality it was the perfect choice as Sam and Joe Graves came up with a clear, vibrant, modern production. The songs had to be decent though, as without strong material it would have been like polishing a turd. Thankfully the songs are stellar and Vega have produced what is arguably their strongest album to date.

Vega have always been a much heavier band than the AOR millstone around their neck might suggest. Put them on a live stage and they’ll give anyone a run for their money, and now they have the album to compliment the live show. Their fanbase is decent, but they need a shot at one of these multi-band line-ups that promoters keep on putting together to plod round the arenas come Christmas time.

Previous Review: Everyday Heroes – ‘A Tale of Sin and Sorrow’
Next Introducing: Dialekt