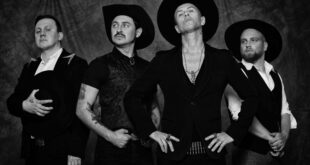 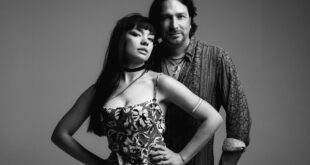 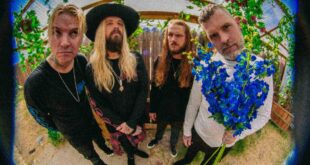 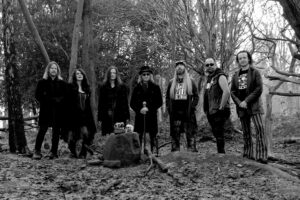 One of the results of the pandemic and the subsequent cancelling of live gigs has been the rise in the number of bands revisiting previously released material, and re-recording it acoustically. For Glasgow’s The Swamp Born Assassins, the seeds were sown by performing an acoustic set instore in a local HMV back in 2019, and if you were one of the lucky ones in attendance, it would have come as a surprise, given how strong the performance was, that (barring rehearsals) this was the first time that the Swamps had performed in acoustic mode. The band would reprise the performance for the Spirit of Wildfire virtual festival-on-the-radio organised by Guy Bellamy for his Great Music Stories Radio show. Fans of the band (collectively known as “Swampers”) began to ask about the band releasing acoustic material, and with time to kill, The Swamp Born Assassins have put together a four-track EP: ‘The Lockdown Acoustic Sessions’. 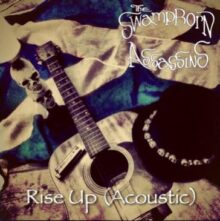 The EP is built around the lead-single, and video, ‘Rise Up’: a song of hope, which Swamps head-honcho/vocalist/harmonica player Lil’ Charlie Moffat describes as “…the perfect reference for the global pandemic and how each individual country can really rise up from this situation”. It’s a five-minute song that always goes down well when played live, and the Swamps have stripped it back and made it into this warm, stirring piece of music with loads of new tricks on it. Guitarist Andy(Paws) Christie begins this new version with a soft, melodic acoustic tone, while his partner-in-crime Craig Buchanan lays down some impressive slide licks on resonator guitar. Drummer Todd Macleod packs an almighty punch on a bodhrán and coupled with Buchanan breaking out a mandolin, gives the song an earthy vibe. Bassist Allen Bell is on hand with his thick basslines, which work especially well during the change in tempo midsong, and David Cowan is on hand with some subtle ivory tinkling to add extra atmosphere. Sitting in the middle, watching everything unfold is Charlie Moffat and his authentic, organic vocals, ably assisted by daughter Kirsty Moffat on backing vocals. It’s a fantastic introduction to The Swamp Born Assassins-acoustic style, with some great playing.

The remainder of the EP features three more tracks from The Swamps repertoire done acoustic-style. ‘The Weeping Tree’ has an intoxicating slide guitar tone throughout, a gorgeous fleeting guitar solo, throbbing percussion, and atmospheric, alluring vocals from both Moffat’s. If it was being played in a live setting, then it would be the perfect moment for dry-ice to come billowing out over the stage. ‘The Gator Hole’ is more uptempo, a shit-kicking, kick-up-your-heels moment, especially when Lil’ Charlie breaks out the harmonica. The fact that the song references ‘Sweet Home Alabama’ reinforces the fact that it’s a celebration of the clock striking 5pm on a Friday and the weekend beginning. A lovely, bluesy guitar solo ends the song; simply superb. ‘Out In The Rain’ is an unashamed tribute from Lil’ Charlie to Glasgow’s people’s poet Alex Harvey, his narrative vocal style oozes Vambo, and coupled with the heady mix of harmonica and slide guitar, makes for quite a dark, cinematic few minutes.

‘The Lockdown Acoustic Sessions EP’ is great fun, The Swamp Born Assassins have stripped back their full-on live sound, and come up with something a little different. The use of traditional instruments on ‘Rise Up’ gives the song an extra dimension, and given that when gigs do eventually return, they will no doubt have new restrictions to contend with, who’s to say that The Swamps won’t break out the bodhrán and mandolin onstage? One can only hope.

‘Rise Up’ is available now as a single, with the full EP available Monday, February 8th. More information here.

Previous Liquid Tension Experiment: New Video – “The Passage of Time”
Next Fish: How Brexit Has Destroyed UK Artists’ Ability To Tour The EU