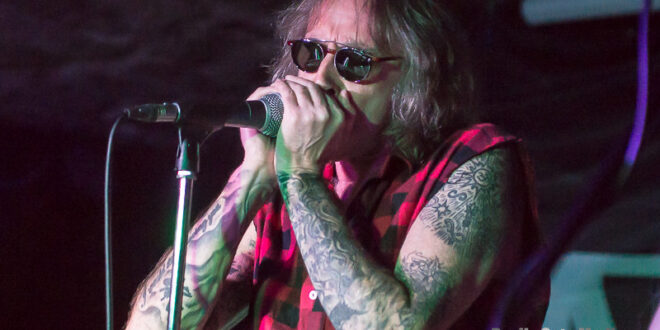 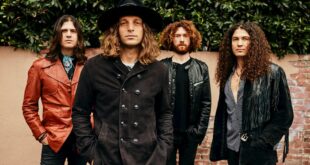 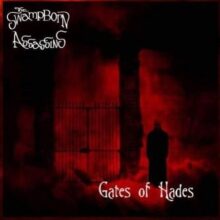 Glasgow’s finest purveyors of “Swamp Rock”; The Swamp Born Assassins, return with a new extended line-up, and a new single – ‘Gates Of Hades’. Swelled by the addition of David Cowan on keys, the Swamps are now a magnificent seven-piece, with the end result being a fuller, fleshed-out sound which at times tips its toes in the waters marked “prog” (but none of that widdly-widdly prog though).

The atmospheric keyboard/synth strains that announce the arrival of The Swamp Born Assassins MKIII come as a pleasant surprise, and as touched on above, they add an extra dimension to The Swamps sound. With the Rush-style synth effects and the soft, gradual build-up, this would make a killer opening song once like-minded folks are allowed to gather in darkened rooms again. A sole spotlight picking out lead guitarist AndyPaws Christie as he wrings the neck of his Fender, and then the drums kick in and the lights explode to life. Damn, I miss live gigs.

Head Swamper Charlie Moffat (also known to the congregation as Lil’ Charlie) possesses (expect Devilish puns in a feature about a track with the word Hades in it, it’s a UN regulation after all) one of the most organic, authentic, and preacher-like voices on the current circuit. His vocals are delivered in an almost spoken-word style like he is delivering a sermon or reciting a piece of poetry. Comparisons with the official bard of Glasgow; Alex Harvey, are not made lightly, but in this instance, they are worthy. Daughter Kirsty Moffat keeps it a family affair with her subtle backing vocals, and she grabs with both hands the chance to shine with her higher vocals during the closing few moments of the track.

Musically, it’s arguably the strongest track from The Swamps to-date. Bassist Allen Bell sounds like he is having a blast taking frustrations, from not being able to play live, out on his axe, and he has quickly formed a strong partnership with new drummer Todd Macleod who has slotted in seamlessly, as has new rhythm guitarist Craig Buchanan. The difference between ‘Gates Of Hades’ and previous Swamps material is that the adventurous side of the band is shining through in various ways. It’s the little extra nuances that add more layers; the spooky guitar sound around the 3.40-minute mark; the keyboard solo mid-song which gives way to a guitar solo that wails; Kirsty’s aforementioned higher vocals towards the end of the track; the music box sound effect on the outro, followed by a gate creaking shut. Little things that add up to make for a rather splendid and enjoyable kick-ass six minutes.