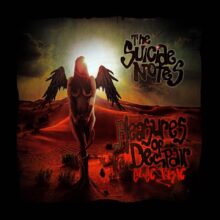 You know that you are onto a winner when your first batch of physical CD’s sell out pretty damn pronto, and you have to put a rush on batch number two. This was the pleasing dilemma that English “gutter-trash rock ‘n’ roll” outfit The Suicide Notes faced when debut EP ‘Pleasures Of Despair – The Acoustic Demos (Vol. 1)’ took a flyer. Striking while the iron is hot, and before every fucker had to stay home because of the sodding lockdown, The Suicide Notes hit the studio and the end result is ‘Pleasures of Despair – Electric’. A sequel of sorts.

Featuring electrified versions of ‘Smoke It Like A Cigarette’ and ‘Ragdoll’ from the acoustic debut, as well as brand new shit-kicker ‘Black Dog Howlin’’ and a riotous run-through of The Dogs D’Amour ‘On The Rocks’, The Suicide Notes have went full electric and turned up the volume to the max. Covering Tyla and The Dogs should give you an idea of what to expect from The Suicide Notes; raw, gritty, sleazy rock ‘n’ roll, with an added dash of punk spirit. In essence; Guns N’ Roses before they became bloated and Izzy left – or GNR if Duff was in charge.

New track ‘Black Dog Howlin’’ kicks off proceedings with a tolling bell, barking hounds and killer, throbbing basslines from Damien Beale. Vocalist Billy T has a full-on throaty rasp which suggests that he gargles Listerine laced with windshield glass each morning, before working his way through 20 Regal King Size by lunchtime. It’s fast and loose, and the perfect antidote to much of the hi-sheen, over-produced music of today. ‘Smoke It Like A Cigarette’ is up next and begins with a stunning, melodic guitar tone courtesy of Alex Holmes, before the band pile in and launch into a joyous few minutes that cries out for audience participation in a sweaty dive somewhere. ‘On The Rocks’ has Billy T in complete Tyla J. Pallas mode and like the original, it swings like Tyla fronting ZZ Top, mainly down to the stellar drum work of Gavin Hobbs. ‘Ragdoll’ has been fleshed-out with a spoken word intro lifted from an old movie, resulting in a six-minute story complete with a guitar sound which recalls the Blondie classic; ‘One Way Or Another’, and more of those delicious basslines.

A glorious throwback to those magical days when rock ‘n’ roll was a tad dangerous, and you came back from a gig black and blue.

Purchase ‘Pleasures of Despair – Electric’ here, the cover artwork alone is worthy of the £6 charge, but thankfully the music is just as good.

Connect with The Suicide Notes: