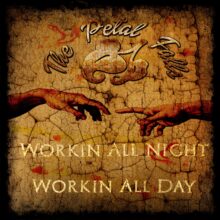 Where there’s a will there’s a way might have been a more apt title for the debut album from Kent-based rockers The Petal Falls. Forming in the mid-’90s, the band were prolific songwriters but for one reason or another, the material was never released, and the band split-up. Through will-power and perseverance, the songs are finally seeing the light of day on ‘Workin’ All Night Workin’ All Day’, the album that nearly never was.

Keith Leahy is the man with his fingers in many pies; founding member, lead vocals, keyboards, guitar, songwriter, studio duties – everything seems to go through Leahy, chances are he also makes the tea and puts the bins out at night. Who said men can’t multi-task? ‘Workin’ All Night Workin’ All Day’ is obviously a passion project for Leahy, and joking aside, the end result is a body of work where songcraft is key, and further proof that a good song is a good song regardless of how long it’s been kicking around for.

The initial reaction might be to class The Petal Falls as AOR, but they offer up way more depth than that. AOR tends to over-rely on layers of keyboards, and while you will hear keyboards on ‘Workin’ All Night Workin’ All Day’ (the keys sound on ‘Love In Motion’ is especially lush), they enhance the songs rather than stifle them. No, The Petal Falls are a rock band, and a rock band with guitar solos, melodic riffing, and a little bit of a bite here and there. Melody plays a major role in the make-up of the ten songs on the album, and songs such as ‘A Man in Chains’, ‘I Was Amazed’, ‘Givin It Up’, and ‘Have a Little Faith’ have melody by the bucket-load. Had acts such as Mr. Mister, Glass Tiger, Chicago, or even Mike & The Mechanics produced these moments, then they would still be coining in the royalties decades later. ‘All Across The World’ is the best song that both Jim Kerr and Bono never wrote. It’s of that era: the era of big-ass stadium rock when UK and Irish bands were kings of the world. Hard to believe now that Simple Minds could fill stadiums in the US.

‘Rain’ offers up another arrow from The Petal Falls quiver, and has a Springsteen-esque vibe to both the songwriting and the performance. A track which possibly could be as equally at home on Springsteen’s behemoth ‘Born In The USA’ album as it would be on the immediate follow-up ‘Tunnel Of Love’. The title track ‘Workin’ All Night Workin’ All Day’ also features a Springsteen narrative storytelling vibe, although musically, it’s more akin to primetime Simple Minds, but Simple Minds with better riffs. ‘Mariah’ is arguably the standout moment on the album. Softer-paced with a Goo Goo Dolls touch, it’s a masterclass in songwriting and shows how sometimes keeping it simple works best. Some lovely guitar playing on this one. Ending on the lighters-in-the-air ‘Colours’, this is an album of constant surprises.

Musical styles and trends will change as often as the weather, but one thing that never goes out of fashion is songcraft, and ‘Workin’ All Night Workin’ All Day’ has songcraft in abundance. An album well worth the wait.