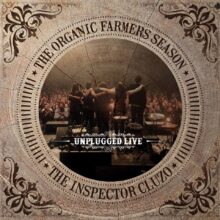 Taking their name from the greatest ever detective portrayed on the silver screen, The Inspector Cluzo are the French blues-rock and soul duo Malcom Lacrouts (guitars/vocals) and Phil Jourdain (drums/backing vocals). You might have caught them awhile back opening for Clutch? You should have caught them at this Summer’s ‘Ramblin’ Man Fair’, but, well, we all know by now that never happened. One thing is for certain; in a normal live setting The Inspector Cluzo are a high energy pair, so it makes sense to sit them down in a theatre, unplug them (to an extent), and record what unfolds. The end result being: “The Organic Farmers Season – Unplugged Live 2020”. The title alluding to the fact that the pair are indeed organic farmers (vegetables and geese), or better still; rock farmers.

Recorded at Théâtre de Gascogne, Mont de Marsan on 12 Feb. 2020, the duo was joined on stage by a handful of additional musicians: Eleonore Denig (violin), Melodie Chase (violoncello), and Eric Montgomery (Wurlitzer). The addition of the strings to the already majestic Cluzo sound was a masterstroke for they elevate the material to another level and add so much to the material. The Inspector Cluzo don’t play it by numbers, the clue really is in the “Organic” part of the album title. Lacrouts has an intriguing voice, alternating between spoken word, high-pitch vocals, and Nick Cave-meets-Johnny Cash gruff vocals. Or during parts of ‘The Sand Preacher’; Elvis-meets-Neil Young. Throw in hints of James Hetfield when it gets dark, and you’re halfway to what Lacrouts sounds like. In other words, it’s pretty damn hard to pin him down, so best just sit back and let the warmth wash over you.

Multiple textures to be found on “The Organic Farmers Season – Unplugged Live 2020”, from the traditional blues feel of ‘Ideologies’ (complete with bottleneck blues intro and stomping kick drum throughout); the overwhelming sense of foreboding on ‘The Run’; the foot-stomping hand-clapping glory of ‘Fishermen’ where just as the listener thinks that they are getting the hang of it, the band through in a little jazz piano solo followed by some wonderfully emotive string arrangements; then the wonderful pairing of ‘We The People Of The Soil’ with a stirring rendition of Neil Young’s ‘Hey Hey My My’.

“The Organic Farmers Season – Unplugged Live 2020” is further proof if required, that a band doesn’t need to play at full-throttle in front of a stack of Marshalls to create something powerful. It all starts with song-craft and The Inspector Cluzo have well-crafted songs by the (goose) shed-load.