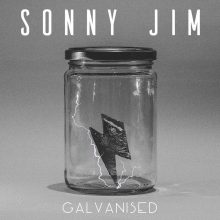 It’s no secret that we do like a bit of Sonny Jim here at DGM Towers. It’s not just the fact that with half of us being Celts we feel a connection with the boys from Bridgend, it’s also because when you press play on a new Sonny Jim release, you don’t know what to expect. And it’s that sense of anticipation that makes it all the more enjoyable.

Each release from Sonny Jim is different from the previous one. The momentum began with ‘Soul King Fire’ back in 2015, kept going with ‘M.A.D’ a year later, and climaxed with the deeply personal ‘Dead Man Walking’ EP in 2017. How could Sonny Jim top such a raw, powerful moment? Simple really, they went back to the beginning, revisited the albums they grew up with, and turned the volume all the way up. Some bands foolishly deny a particular influence – Greta Van Fleet spring to mind – but with ‘Galvanised’, Sonny Jim are wearing their influences on their collective sleeves. Any doubts quickly dispersed by a quick glance at the cover artwork, an AC/DC lightning bolt captured in a bottle.

‘Galvanised’ is not however simply an Airbourne-like ‘DC influenced release. It takes the chutzpah that the Young brothers had in spades, gives it a quick polish, throws in some killer hooks, ramps the volume up, and the end result is rather special indeed. The stellar production from Tim Hamill (Buck & Evans, Son Of Man, Tyketto) means that drummer Robbie Brewster sounds like he’s right in front of you (especially on the glorious ‘No Shame’), so good to hear the drums way up in the mix, they way that they should be.

So you’ve searched for Sonny Jim on Spotify, added them to your playlist, now what can you expect? Five memorable tracks where, although the common ground is the classic influences, each one of them sounds different to the other. ‘Don’t Know What You Got Til It’s Gone’ is built around a simple, classic guitar riff from Lloyd Jenkins, and a pulsating, steady beat from Brewster. I’m saying a simple riff, but since I can’t play for shit, it might not actually be that simple. Jenkins coaxes a gorgeous, shimmering tone out of his guitar in places and the end result is a slow-burning track that creates involuntary head-bobbing. The afore-mentioned ‘No Shame’ is massive. Vocalist Jay Donagh puts in one hell of a shift on a track where Sonny Jim make their feelings known on the Brexit debacle. The Gibson SG has been unleashed and Lloyd Jenkins puts it to great use. Bemoaning the lack of guitar solos in music today? Then check this bad boy out.

‘Ride Of Your Life’ is a ballsy rocker akin to the hooter going off at 5pm on a Friday and the weekend is all yours. It’s the soundtrack to you walking through the factory gates and turning to raise the middle finger. ‘Everything’ combines a Billy Duffy-like guitar sound with a hint of James Dean Bradfield-style vocals. With its strong melodies and hooks, it’s perhaps what you might call the “classic” Sonny Jim sound. Rounding out the five tracks is ‘Final Salute’, a gentle, heartfelt tribute to Malcolm Young written by the band on the day that the legend sadly passed.

Another winner from Sonny Jim, and with Classic Rock Magazine onboard, hopefully the name will be much more familiar in the forthcoming months.