Given how Shinedown never seem to sit still, it was inevitable that frontman Brent Smith and guitarist Zach Myers would fire up their stripped-back Smith & Myers project for another outing. What came as a surprise though was the fact that the pair produced not one, but two albums. Simply titled ‘Volume 1’ and ‘Volume 2’. 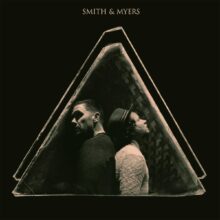 If you are aware of the long-running fan-requested covers (where the duo tackled tracks like Adele’s ‘Someone Like You’, ‘Tallica’s ‘Nothing Else Matters’ and Phil Collins’ ‘In The Air Tonight’) then the format will be familiar. For the debut full-length album(s), however, fans are treated to original tracks as well as hand-picked covers. With the end result being an emotional body of work which sparks debate, as well as making the listener actually stop, and listen.

Track sequencing is crucial to an album (keyword being “album”), performers don’t play dartboard bingo when it comes to which track comes after another. There is a thought process involved. And ‘Volume 1’ begins with a real statement from Smith & Myers. Opening track ‘Not Mad Enough’ was written in the immediate aftermath of George Floyd’s death, and although it’s just vocals and an acoustic guitar, it packs an almighty punch. The lines…” Stop telling me I gotta calm down/You’re not mad enough/You’re not mad enough/How many heads are gonna have to hit the ground?/Before you wake up/Before you wake up/You’re not mad enough…” serve as a wake-up call for those choosing to bury their heads in the sand and opt for a life of apathy. The clarity of Smith’s vocals push the message front and centre and amplifies the fact that Smith is one of the most powerful voices in Rock today. How do Smith & Myers follow that up? With a stark, poignant run through of Neil Young’s iconic ‘Rockin’ In The Free World’, that’s how. And it slots in perfectly with ‘Not Mad Enough’ and proves that not much has changed since Young wrote it thirty-something years ago. Smith & Myers backed with a simple piano-driven tone, gentle, unobtrusive string arrangements, and the second-best lyric ever…” There’s one more kid that’ll never go to school/Never get to fall in love, never get to be cool…”, it is truly magical. The best lyric ever? That would have to be the entire ‘Folsom Prison Blues’.

Originals alternate with covers, so once ‘The Weight Of It All’ (fans of Shinedown’s ‘Call Me’ will love this one) fades out Post Malone’s ‘Better Now’ kicks in. Myers furiously strumming on his acoustic, Smith sounding like he is having a blast, the pressure is off, and the multi-platinum artists are clearly enjoying stripping it all back. When it comes to stripped-back albums the tendency might be to think that it was thrown together as an afterthought. A stop-gap. But with GRAMMY Award-winner and longtime collaborator Dave Bassett at the production helm, this is anything but a stop-gap, something best exemplified by ‘Panic’. Yes, it’s stripped-back, but it’s all the little nuances that make it all the more interesting. Echoing vocal effects, backing vocals that bounce between left and right if you are listening on decent cans, Myers atmospheric guitar picking, all combining to make for an interesting, original song that should have the listener checking that there is no-one alongside them whispering in their ear. One of the many highlights on the album is the duo’s rendition of the INXS classic ‘Never Tear Us Apart’, the handclaps are infectious, but it’s Myers all-too fleeting electric guitar break that comes as a real thrill and leaves the listener thirsting for more. ‘Coast To Coast’ is perhaps the most Shinedown-like of the originals. A not-too-distant cousin of ‘Unity’ from the ‘Amaryllis’ album, it’s hugely uplifting in its execution. Another original; ‘Since You Were Mine’, is further proof if needed that no-one quite does heartache like Brent Smith. 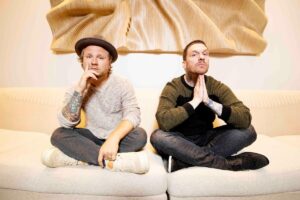 This heartache continues over onto ‘Volume 2’, which begins with the sublime ‘Bad At Love’. Best described by the man himself as …“Bad At Love was one of the very first original songs to be written for the project. I think ultimately the song was born from my own romantic relationships. When I love someone, I love them fully and sometimes the passion can be too much. I always know when it’s time to move on. That being said, I am extremely grateful that I am still very good friends with the ladies I have loved, and still love, to this day.” It’s a beautiful, honest piece of music with a slight Motown vibe running through the vocals and proves that the simple approach can be just as effective as going all-in.

‘Volume 2’ follows the same approach as ‘Volume 1’, original followed by a cover, and ‘Bad Guy’ from Billie Eilish is the first to get the Smith & Myers treatment. Always thinking ahead, and outside of the box, Shinedown doesn’t really conform to what people might expect a Rock band to be like. So a Billie Eilish cover makes perfect sense, especially when it’s as deliciously dark as this one, the murder folk-like last few moments are a real thrill that come straight out of the leftfield. ‘Sledgehammer’ is a blast! No other way of describing it. A total blast that sounds like it was recorded in one take. Along with the aforementioned ‘Bad At Love’, ‘GBL GBD’ is the pick of the originals. Get busy living, or get busy dying abbreviated to ‘GBL GBD’ (all caps intentional) is a little piece of magic. The pep-talk needed to get your arse moving in the morning, or maybe the push needed to finally do that thing that you’ve put off for ages. Followers of Brent Smith on social media know that he is big on motivation, and with ‘GBL GBD’ he has the perfect theme tune.

After an uptempo version of ‘Rebel Yell’, the originals return with ‘Like You Never Left’. The acoustic intro from Myers sparks recollections of the great Billy Duffy on ‘Heart Of Soul’, and this continues throughout. Another bearing of the soul from Smith, and although it seems a deeply personal moment, the listener never feels like they are intruding. A haunting rendition of R.E.M.’s ‘Losing My Religion’ doesn’t stray too far from the original, and it’s easy to get swept along by the hooks that made the original so memorable. Fans of Zach Myers (or Shinedown for that matter) won’t be surprised to hear that it’s his lead-vocal version of ‘Don’t Look Back In Anger’ which brings ‘Volume 2’ and the project to a close. A longtime major Oasis fan, Myers proudly wears the Union Jack on his sleeve on this one, and it’s hard not to imagine the smile on his face during this tribute to his heroes.

Brent Smith and Zach Myers have come up with a double album that sounds effortless, they make it look easy, while anyone who has tried a project such as this knows that it is anything but easy. At times the music on offer is raw and honest, other times it’s joyous and uplifting. Two albums that you didn’t know you needed in your life until the first moment you devoured them.

‘Volume 1’ is available now, ‘Volume 2’ is released 23rd October via Atlantic Records, the same day as a combined CD of both versions (vinyl to follow), more information here. 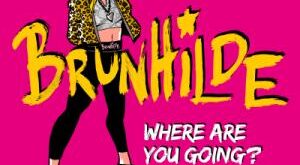 Quo vadis – where are you going? This question has been bothering mankind for thousands …