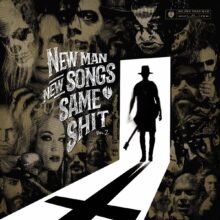 The new album from Behemoth’s Adam ‘Nergal’ Darski’s dark folk/blues/Americana project Me And That Man takes a bittersweet and saddening twist with the recent unexpected news that former Turbenegro frontman Hank Von Hell sadly passed away on November 19th. ‘New Man, New Songs, Same Shit, Vol.2’ opens with ‘Black Hearse Cadillac’, featuring the charismatic Hank Von Helvete aka ‘Hank Von Hell’ on guest vocals (alongside Anders Odden from Cadaver on guitar), and if you listened to it prior to November 19th then you would have no doubt marveled at the sinister vocals from Hank, which – coupled with the foreboding lyrics – brought an eerie feeling to proceedings. Listening to it post-November 19th, it takes on a shocking, heartbreaking sensation that can be quite uncomfortable. However, as posthumous tributes go, it is a masterful reminder of how much of a miss Hank will be.

‘New Man, New Songs, Same Shit, Vol.2’ does exactly what it says on the tin: it’s the immediate follow-up to ‘New Man, New Songs, Same Shit, Vol.1’ which was released March 2020. And like the original, ‘Vol. 2’ is a collection of songs featuring Nergal with a whole host of famous names playing music that you might not expect them to play. But given that the subject matter and lyrical content is so dark, it shouldn’t really come as a surprise to see names such as Gary Holt (Slayer, Exodus), Alissa White-Gluz (Arch Enemy), Mary Goore, Randy Blythe (Lamb Of God), Myrkur, Devin Townsend, Olve ‘Abbath’ Eikemo (Immortal, Abbath), ‘Mantas’ from Venom, and the mean man himself Chris Holmes, alongside Nergal. 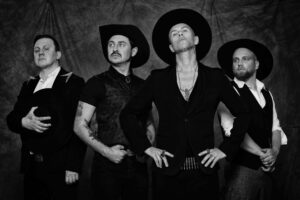 ‘Under The Spell’ might get all the attention due to the appearance of the mysterious “Mary Goore”, but even if you don’t recognise the dulcet tones of the main performer, and have to use Google, you can’t help but be impressed by the insanely massive bass rumble featured throughout, and the total change in direction at 03:11 minutes in, those female backing vocals…oh my. The blues-based ‘All Hope Has Gone’ quickly follows on with a vocal performance from Blaze Bayley that might just have you spitting your hot drink out once it kicks in; damn, it totally slays…as does the killer guitar solo from Gary Holt. The female backing vocals seem to be uncredited, but whoever it is, deserves great praise as they really are something special and help bring a magical touch to this beast of a track. 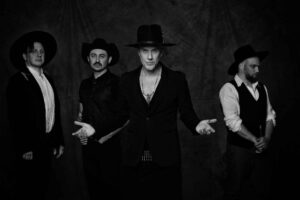 ‘Losing My Blues’ features Olve ‘Abbath’ Eikemo, Frank The Baptist, and Chris Holmes, and is the perfect soundtrack for any sort of rumble scene from a ‘60s exploitation movie. The slide-guitar tones on ‘Coldest Day in Hell’ are alone worthy of the price of admission, but if you need more, then feast on the pounding drums that rattle loose the dental work in your mouth. ‘Blues & Cocaine’ kicks off an impressive five-song sprint to the finishing line and with ex-Misfits frontman Michale Graves at the helm, it’s a shit-kicker full of gnarly, fuzzy guitar riffs. Randy Blythe pops up on the effortlessly cool ‘Silver Halide Echoes’ with his just-gargled-with-Listerine-laced-with-windscreen-glass vocals and he really does make it all sound so easy. Ever wondered what Alissa White Gluz and Devin Townsend would sound like on the same track? Then wonder no more for both appear on ‘Goodbye’, and the end result is arguably the stand-out moment on the album. A slow-burning track that features the delicious clean vocals of White Gluz pushed to the forefront, watch out for the atmospheric backing harmonies kicking in towards the end – manna from heaven.

Ending with the always impressive Myrkur on ‘Angel of Light’, and the totally gonzo, hand-clapping fury of ‘Got Your Tongue’ which features Chris Georgiadis of  Turbowolf, this is as varied an album as you are likely to discover during this fucked-up year, one of the most pleasing aspects about ‘New Man, New Songs, Same Shit, Vol.2’ is that the listener doesn’t quite know what is lurking around the corner.