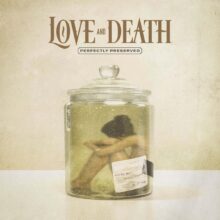 Coming some eight years after 2013’s debut ‘Between Here & Lost’, Korn guitarist Brian “Head” Welch has finally given Love and Death fans what they had probably given up hope of ever hearing: a brand new album from Love and Death.

Welch has always been an underrated vocalist, but the state of the world in recent times means that his tortured, angst-ridden vocals are more authentic today. ‘Perfectly Preserved’ marks the debut of bassist/co-producer Jasen Rauch (Breaking Benjamin) as a fully-fledged member of Love and Death, and with guitarist JR Bareis helping out on frontman duties, Welch has come up with an album big on choruses tailor-made for the American arena circuit should it ever return. It’s easy to listen to tracks like ‘Tragedy’, ‘Death of Us’, and ‘Lo Lamento’ and imagine crowds losing their shit over the soaring hooks and mix of melodic, clean vocals with a spatter of harsh here and there, as well as the big-ass downtuned riffage.

Thanks to the background arrangements, ‘Down’ has a slight hint of an industrial influence running through it, the co-vocals are impressive, and the end result is a track that is heavy enough to keep the metalheads happy, while light enough not to scare away the casual American rock radio listener. Even when Love and Death dial up the aggression on tracks like the haunting ‘Slow Fire’ and ‘The Hunter’ (featuring Rauch’s Breaking Benjamin bandmate Keith Wallen), the melodies and arena-friendliness are never too far away. ‘The Hunter’ especially sticks out for its mix of progressive leanings (Queensryche-meets-Dream Theatre) with flashes of a sound perhaps more expected from a band such as Starset. Drummer Isaiah Perez totally slays on the heaviest moment on the album; closing track ‘White Flag’, which explodes to life with a scream of “5,4,3,2,1” just as the song seems to be fizzling out. A fine way to bring the album to an end.

Much has been made of the cover version of ‘Let Me Love You’, an EDM/pop hybrid from DJ Snake which happened to feature pop-brat, Justin Bieber, here it features ex-Flyleaf vocalist Lacey Sturm on guest vocals, and it’s actually good fun. Everyone sounds like they are having a ball adding a metallic slant to the track, and it’s always great hearing Sturm. A fleeting few minutes that raises a smile or two, and since 2021 has started the same way that 2020 ended, that’s got to be a good thing.

While there will always be an element of the signature Korn sound to Love and Death, there is enough on ‘Perfectly Preserved’ to keep non Nu-metal fans interested.

With an enthusiastic, muscular sound, Bolton-based Unknown Refuge are starting to make some waves in …