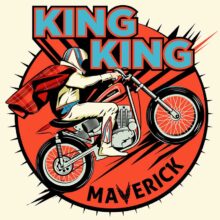 Maverick – “an unorthodox or independent-minded person”

Alan Nimmo on calling the new King King Album ‘Maverick’ – “I named the album ‘Maverick’ at a time when it was risky to do so. I made some bold moves and changes from band members to behind-the-scenes stuff. I guess that’s who I am. I’m a risk-taker!”

Nimmo’s words, coupled with a cover image of what could be the original maverick/mental bastard (delete where appropriate) Evel Knievel (complete with Tartan cape) racing towards whatever crazy-ass stunt he has lined up, means that ‘Maverick’ is a very apt title for studio album number five from the Scots.

Those line-up changes; Andrew Scott comes in on drums, Zander Greenshields on bass, and the familiar face of Stevie Nimmo bringing his six-string talents to the party. With the Nimmo Brothers together again, it means that with two accomplished guitarists onboard, King King benefit from an altogether beefier sound.

The first thing to note about ‘Maverick’ is that it’s a lean album. Ten tracks in total, given the listener no excuse to get bored, or even skip a track or two; as is the want with some albums today. Then there is the sound. Not just beefier, as mentioned above, but more of a Bad Company, Bernie Marsden-era Whitesnake, Thunder kinda vibe. Certain tracks could be the best songs that Luke Morley never wrote (‘When My Winter Comes’ and ‘Dance Together’ in particular). The bluesier aspect of previous King King albums not as prevalent on ‘Maverick’.

A majestical Hammond Organ sound from Jonny Dyke heralds in King King 2020-style on opening track ‘Never Give In’, and hangs around to bring that certain quality that only a Hammond brings. It’s a slow-burning opener with some beautiful guitar licks and a wicked change of pace where the band floors it briefly. Maybe it’s having his brother (a frontman in his own right) alongside him, giving him a bit of a push, but Alan Nimmo sounds amazing. His throat op scare of a few years ago, a distant memory. His vocals sound larger, more soulful, more experienced, and mature. The Bernie Marsden-era Whitesnake mentioned earlier? ‘Fire In My Soul’ could have been written in, what is for many, the golden era of Whitesnake. The keyboards from Dyke again playing a major role, on a track where King King does the simple things really well. The melodies are to-die-for, with the end result being a fine slice of music perfect for the drivetime slot on BBC Radio 2. Likewise, ‘Everything Will Be Alright’ has been A-listed already? Yeah? If not, why not? Such a strong, radio-friendly few minutes.

To these ears at least ‘Whatever It Takes To Survive’ shows the growth in the King King song-writing department. Nimmo delivers a wonderfully restrained vocal performance that oozes class (as he does on the piano-driven ‘By Your Side’), he lets the song grow at a steady pace and never over-reaches, instead, he dials it down just as you expect him to go for a long high note. The dual guitar work is stunning, and it is so good to hear actual guitar solos peppered throughout a song rather than just tacked on as an afterthought. From the Bad Company-like strains of ‘Whatever It Takes To Survive’, to the Stevie Wonder/Bobby Womack funk of ’I Will Not Fail’ – a track that possesses one almighty cocksure strut to it, and another killer guitar solo.

Previous BRUNHILDE: New Video – ‘Where Are You Going?’
Next Review: Floor Jansen – ‘Alone’