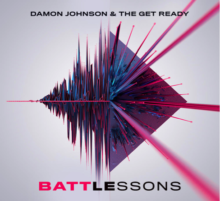 Damon Johnson’s 2019 solo album ‘Memoirs of an Uprising’ was a stunning, diverse affair that comes highly recommended. For the follow-up, Johnson has gone in more of a classic hard rock direction and recruited Jarred Pope on drums, and bassist Robbie Harrington to form a killer power-trio. The end result being ‘Battle Lessons’, the debut album from Damon Johnson & The Get Ready.

As you would expect from an album with Johnson’s name attached in bold, the guitar playing is exemplary. Heavy and delicate, subtle and fiery, ‘Battle Lessons’ is a guitarist’s guitarist album. But as anyone familiar with Johnson’s work with Brother Cane in the early ’90s, and anyone who caught his club tour alongside his buddy Ricky Warwick (such a great night out), will know, that as a vocalist, Johnson more than holds his own. His vocals bring a sense of charisma to the party in much the same way that Joe Walsh does when he performs lead vocals. Unconventional to an extent, but warm and authentic, and on ‘Battle Lessons’ Johnson handles the lead vocals role with his usual aplomb. His guitar playing? Out of this world. Check out his sizzling work on the likes of ‘Let The Healing Begin’, and ‘Casual Beast’ and drool with delight. 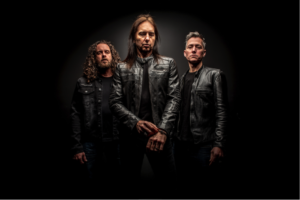 As previously mentioned, ‘Battle Lessons’ is more of a full-pelt rocker of an album in comparison to the reflective ‘Memoirs of an Uprising’. There’s something special about a power-trio, almost as if they play that bit harder just to prove a point that three is plenty, and Johnson has corralled a pretty damn special rhythm section that gives the album one almighty backbone. Opening with the title track itself, ‘Battle Lessons’ is a fat-free album, no filler tracks at all which means no dips in quality. Restraint is in short supply today and in the age of albums running to 14 and sometimes 15 tracks in length, Johnson has wisely kept it to a lean 9-track album. The melodious, sharp riffage that features throughout the title track is impressive, it’s a catchy opener with simple vocal hooks from Johnson that hang around for days on end after the track has faded out. ‘Can’t Clap Any Louder’ is even bigger; a track full of pop-sensibilities that gradually builds to a chorus that defies anyone not to join in. Pretty much impossible to resist clapping along to it, and with the piano in the background, the track has all the airs and graces of Elton John and long-term guitarist Davey Johnstone rocking out at Madison Square Garden in the glory days.

‘Talk Yourself Into Anything’ is pretty damn cool, Johnson’s spoken vocals recall Ian Gillan during ‘No Laughing In Heaven’, and with some fantastic playing from Jarred Pope, this is one of many standout tracks on the album. Other standout moments include the shimmering guitar sound on ‘Shadow Country’ (a track that features the band launching into an unexpected heavy, bluesy jam towards the end), the Montrose-like power chords on the thrilling ‘Brace For Impact, the sense of urgency on ‘Lightning Bolt (Everything Will Be Alright)’, and the wonderful arrangements on the stripped-back, blissful ‘Love Is All You Left Behind’.

A damn fine album where Damon Johnson & The Get Ready make it look effortless.