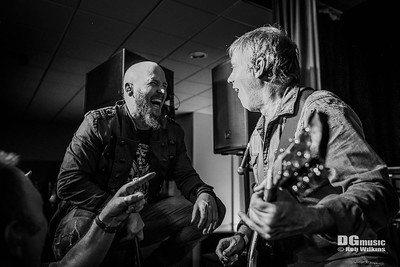 A comfortable night in our caravan and then a good cooked breakfast (the quality, variety and price of both food and beer was definitely a plus at Tencreek) to set up for the second day (and being completely honest, possibly the weaker of the three days in terms of headliners for me).

Things were not as expected though. Arriving at the entertainment complex it was suspiciously quiet and the stage was empty. It soon became clear that a major accident (unfortunately resulting in the death of a driver, putting everything into perspective. The thoughts of everyone at the event sent to their family and friends) had left all three bands for the afternoon stranded on the motorway. 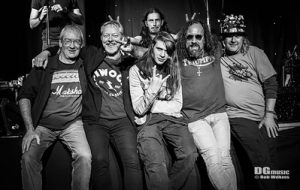 Now, anywhere else that would be a disaster, but not at Cornwall Rocks! Firstly, a clear announcement was made that there was no curfew. The bands would all play, whenever they arrived and would play full sets. If that took until the early hours, so be it!

Secondly, in the manner of “Can anyone fly a plane?” or “Is anyone on board a Doctor?” A call went out “Can anyone play a musical instrument”. Literally within minutes members of Sons of Liberty who were still on site (slightly hungover?), and other musicians of all ages were running to get instruments and writing a classic rock setlist. It was just a little bit magical and summed up this fantastic little friendly festival as the gap in the schedule was filled with five guys jamming together just for sheer pleasure and fun. The audience loved it and it was clear the “M5, Kick out the Jams” band did. Thanks to all for stepping up!

A cheer went up as one of the scheduled bands appeared. Unfortunately for my other half it was exactly the wrong one! She is a massive Hollowstar fan and was gutted that she would miss them as she had to work through the day. When she heard the bands were all running late she had her fingers crossed it would mean they were delayed until she got there, but no such luck as they managed to arrive first. Joe singing the praises of “Waze” for getting them past the jam that the others were trapped in. 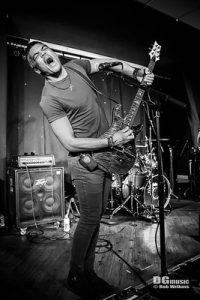 Once again there was a little bit of magic. Hollowstar, realising that there was nobody else at the venue, just announced that they would play until there was! So we got to enjoy far more than an hour and also nearly got to hear the first live airing of “The Teletubbies theme- heavy metal version”. Easily the best show I have seen from Joe and the guys. Joe himself seemed more relaxed and dare I say happier? (he has been very open about his mental health challenges) and his chat to the crowd was warm and engaging. Phil Haines was as energetic as ever, whirling around like a dervish. Tom Collett more laid back but ripping out awesome riffs and Jack Bonson battering the kit at the back. There was even a third Bonson on merch!

Hollowstar are, for me, one of the NWoCR bands to watch for. They have it all. Stand out songs include “Let You Down”, “Overrated” and the harrowing “Good Man Gone” (the intro to which can be deeply powerful to the extent that it made my two friends cry at Steelhouse). We even got a cracker that has never been recorded (“In My Dreams”?) Eventually a somewhat relived Joe spotted Scarlet Rebels arriving and bought the set to a close. Class act guys – in every way! Thank you! 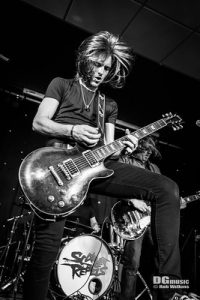 Relieving them from their self imposed responsibility were the aforesaid Scarlet Rebels (pre V0iD) from South Wales. Full of energy and life, it was easy to see why they are one of the bands from the NWoCR that are making waves. Sounding as if they were well and truly influenced by the past, yet sounding bang up to date, their set was full of anthems and sing-a-longs that would have graced any band of that previous era. Wayne Doyle providing the words with flare and flourish is surrounded by the guitar sounds of Chris Jones and Josh Townshend, whilst the rhythm section of “P” and Gary Doyle lay down foundations that could support a mountain. Check out songs such as “No One Else to Blame” with its blistering guitar intro, and the rhythm of “Shattered Dreams” to see just why so many people are talking about the rebels right now.

Unfortunately the Luke Doherty Band never did reach Cornwall so that was it for the morning. 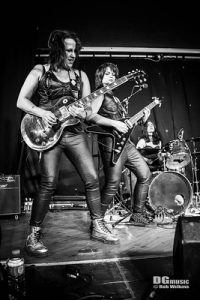 Launching the afternoon session were JoanovArc from London and further North. It is a little criminal that the band have been around since 2004, but this is the first time I have seen them, and they bought an energy and musical diversity to the day that was delightfully refreshing. Led by Shelley Walker on lead guitar/vocals and Laura Ozholl on lead vocals and rhythm guitar, they were clearly a band still finding a comfortable rhythm with newer members Ellie Daymond on drums and Keira Kenworthy on bass. Musically though those two add something refreshing. Ellie pulling out a series of challenging rhythms and Keira turning out be one of the best young bass players I have seen in a long time as she moved effortlessly from funk to rock and even a keyboard solo (yes, on a bass, trust me, you need to see it and hear it). The longer standing members, not to be outdone, trade seriously heavy guitar licks and vocals back and forth.

One of my favourite tracks was the distinctly unusual but very catchy “Say Sayonara” with it’s Babymetal vibe and a turn on the vocals for Kenworthy that showed her talents extend past the bass guitar. I hope this lineup settles a little and relax on stage together because the sound and musicianship were top notch.

To add to the slight chaos of the day Diamond Head had driven all the way from Germany for the show and were due to drive straight back, and so they swapped sets with The Groundhogs.

I struggled to get into the set for some time, an emotion shared with a large part of the crowd as the floor was far quieter than it had been for many bands. Singer Rasmus Bom Anderson took exception and rather than drawing people to the stage with the quality of the music, berated them for not being as active as a crowd in Germany. Once he decided to just get on with it and stop criticising, the set took a definite upturn. Using the speakers at both sides he became a smiling and strong voiced participant and the band seemed to react to that. 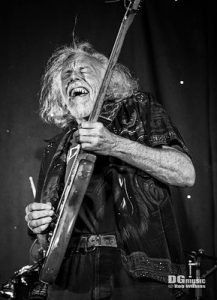 It may have been tiredness but for me, Diamond Head were the weaker of the three headliners, and despite some great guitar work from Brian Tatler and a drumming masterclass from Karl Wilcox, they failed to really climb to the peaks of the other two.

The swap with The Groundhogs may have contributed to that but in reality the evening more or less ended when Diamond Head finished and the crowd was visibly diminished for the last act of the evening.

It was a shame as what I caught of the set was full of bluesy guitar, playing that on any other night would have raised the roof, but the odd day seemed to have taken its toll and I will be honest and say that I headed for my bed long before the end of the set.