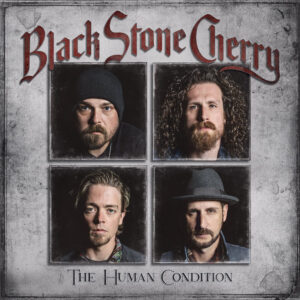 ‘The Human Condition’, the seventh studio album from Kentucky’s finest export since Bourbon; Black Stone Cherry, is akin to moving from third gear into fifth gear by skipping fourth (stick shift reference simply to confuse our American cousins). In other words; it doesn’t hang around. It’s almost like Black Stone Cherry realised that they are “elder statesmen” in the rock & roll field and set out to show any would-be usurpers that they won’t let go of their crown without a fight. For not only is ‘The Human Condition’ the quartet’s heaviest album in some time, but it’s also the sound of a band as fresh and vibrant as the day they formed almost twenty years ago. Christ, you know time is getting on when Black Stone Cherry are approaching their 20th anniversary as a band! Remember how they laid waste to one of the smaller stages when Aerosmith played at Hyde Park back in 2007? No-one stood a chance after that, and the love-love relationship between Black Stone Cherry and the UK began in earnest.

So, thirteen years and six studio albums after impressing on a cold and wet shitty day in London, Black Stone Cherry return with studio album number seven and bring the Kentucky sunshine with them. When Chris Robertson ushers in the album with the lines…” People people your attention, please…” on the opening track ‘Ringin’ In My Head’, it’s almost like a statement of intent. What follows is thirteen tracks chock-full of variety which showcase the maturity and growth within the band. The trademark BSC chugging guitars are of course still present, but there’s also the most commercial moment in their long career in the shape of the glorious and uplifting ‘When Angels Learn To Fly’, as well as a tip of the hat to Iron Maiden on the twin guitar attack, neck-straining ‘Ride’. Fantastic to hear guitars so high up in the mix on an album in 2020, especially the incendiary solo with buzzsaw riffs in the background. Conscious or not, the Maiden influence is there.

It’s the little nuances that help make ‘The Human Condition’ so memorable; the light, atmospheric background vocals on the aforementioned ‘Ringin’ In My Head’; the big-ass bass licks on ‘Again’; the garage-rock intro to ‘Push Down & Turn’; the triumphant yelp as ‘Live This Way’ fades out; the trippy intro to ‘Some Stories’ and the guitar effects throughout the same song. They all add up and highlight a band comfortable and confident enough to do it their own way. Ultimately it’s the songs that make the album stand out. And ‘The Human Condition’ has some beauties. ‘In Love With The Pain’ is so effortlessly cool that it doesn’t walk; it glides. ‘The Chain’ has a killer, trippy Sabbath-esque intro that grows into a skull-crushing anthem-in-waiting. ‘Keep On Keepin’ On’ is a simple, well-executed slice of unashamedly feelgood Rock. Hell, even the rollicking, fuzzy, run-through of ELO’s ‘Don’t Bring Me Down’ is good fun! Kinda hard to resist really.

Since signing with Mascot Records, Black Stone Cherry have hit a rich vein of form. ‘The Human Condition’ being the latest in a long line of memorable albums. The young pretenders are going to have to wait a bit longer to claim the throne from the Weegie-Kentuckians.