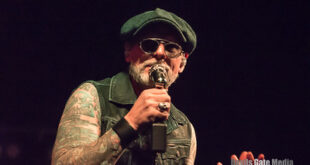 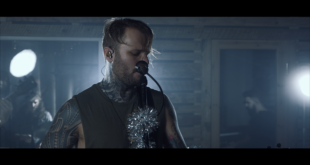 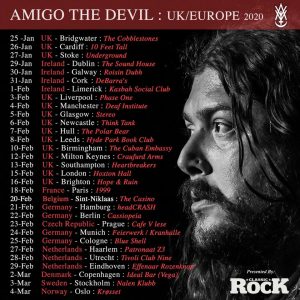 Allow me to go full-on Cotton McKnight for a moment…”Ladies and gentlemen, I have been to the Great Wall of China, I have seen the Pyramids of Egypt, I’ve even witnessed a grown man satisfy a camel. But never in all my years as a sportscaster have I witnessed something as improbable, as impossible, as what we’ve witnessed here today!”. Now, change “sportscaster” to gig-goer, and it goes a little way to describe the sheer incredulity of catching murderfolk’s finest; Amigo The Devil in concert for the first time.

Let’s begin with the audience; metalheads mixed with punks, rednecks (okay, the local support band The Brothers Outlaw) mingling with perfectly coiffured Peaky Blinders-style hipsters. All here to worship at the church of Danny Kiranos aka Amigo The Devil. One guy with a guitar (and a banjo), perfectly able to not only capture the audience of a packed house and keep them hanging on his every word for an hour or so, but also have them bellowing out the lyrics to some of the darkest, most sombre (but strangely, also quite joyous) music that you are as likely to hear today.

Take ‘I Hope Your Husband Dies’ for instance, a few minutes that more than quite a few in the audience seem to identify with. A simple tale of not being able to move on after a relationship breaks down, and wishing the new fella…well, dies really. No sugar-coating it, he wants the other guy six feet under, and when the chorus calls for the audience to sing the title of the song over a few times, they do with relish. So much so that Kiranos is genuinely open-mouthed in astonishment at the reaction from the crowd.

Then there is the harrowing tale of depression; ‘Cocaine and Abel’, where the room falls deathly silent as Kiranos unravels in front of everyone. It’s a powerful few minutes that Kiranos lightens by pressing a siren on his phone as he laughs….”Back to party mode!”. ‘Hungover In Jonestown’ has the perfect tempo to get the crowd swaying side-to-side, and raising their glasses in appreciation of an artist from Texas who walked onstage with not only a bottle of Buckfast, but also a bottle of Irn Bru 1901, give that man the keys to the city now!

His first words after taking to the stage were “What the hell are all you doing here?!” It would seem that for once all those that clicked “going” on the official facebook event page actually meant it. Perhaps Kiranos had set his expectations for his debut UK tour quite low, but this was truly one of those “had to be there” moments. A moment where the lines between performer and audience didn’t seem to exist, a total celebration of the fact that everyone in attendance was very much still alive.

Catch Amigo The Devil on tour in the UK now, all tour dates can be found here. 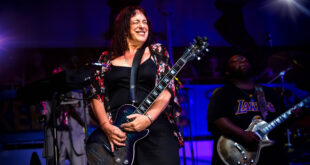 Chicago-based slide guitar virtuoso and singer-songwriter, Joanna Connor, who is best known as one of … 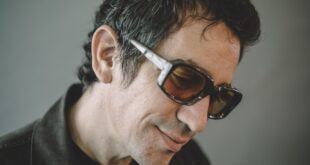 “Since I was very young, I remember hearing the music of Sonny Terry and Brownie … 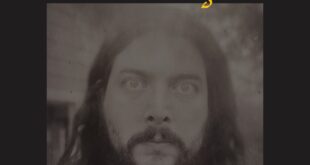 Danny Kiranos, otherwise known by his musical alter ego Amigo The Devil, has announced a …