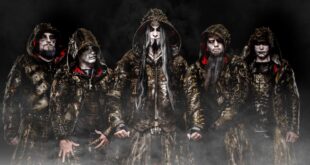 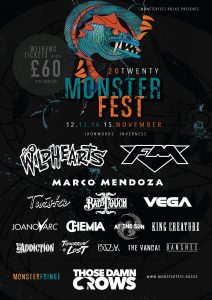 Monsterfest, the Inverness indoor music event returns for its third year, and biggest event to date at The Ironworks in November. The festival has announced The Wildhearts and FM as headliners, which will see both bands performing for the very first time in the Scottish Highlands. They join a bill that also features former Whitesnake, Thin Lizzy and Dead Daisies member Marco Mendoza, Those Damn Crows, VEGA, Bad Touch and a range of other acts across Thu-Sun, Nov 12-15 2020.

The Wildhearts latest album Renaissance Men was voted record of the year by Classic Rock Magazine. FM have performed on the biggest stages, touring with the likes of Bon Jovi, Heart and Tina Turner. Monsterfest Director Steve Raeburn said “We are thrilled to be bringing these great headliners to Inverness for the very first time. The Wildhearts are renowned for their high energy performances, and FM are one of the UK’s very best melodic rock bands.“

Mark Lenthall, Monsterfest Marketing Director added “Music fans in The Highlands often have to travel a long way south to see the best rock acts, so we are delighted to be announcing Monsterfest is back, and even bigger than last year. Our first release of weekend tickets are already selling fast and with so many people telling us how much they love coming to Inverness, we are sure they will sell out”

This year Monsterfest has expanded to run over four days, with school children and young people getting the chance to find out about the music business from industry experts on Thu Nov 12. This will be followed by ‘The Monster Fringe’ featuring local bands and headlined in the evening by Those Damn Crows, who have just completed a sell-out UK tour and have an album currently high in the UK chart.

Tickets are on sale now here and can also be purchased in person from The Ironworks, Academy Street, Inverness. 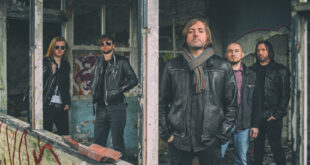