Glaswegian stoner doom band The Rhubarb recently released their latest EP Black Sun along with a lyric video for the lead-single ‘Drag Me To Hell’. We caught up with the band to get an insight into the background of The Rhubarb and find out what makes them tick and in the case of Hannah on bass/vocals, the guilty pleasure she keeps on her playlist. Acquaint yourself with The Rhubarb below, and watch out for the new single ‘Part-Time Suicide’ in mid-February. 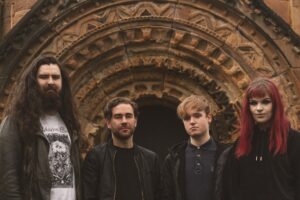 What are the origins of the Rhubarb? How long have you been working together? And you’ll be sick of being asked, where did you get your name from?

Hello! How are you doing? Haha, always a pleasure to tell our story. We are 4 piece doom band from Glasgow with Michael McConville on guitar, Jack Donnelly on drums, Seán Maguire on vocals, and (myself) Hannah White on bass/vocals. We met in 2014 at Riverside Music College where we attended and studied music performance. We had a slightly different lineup at the time before Michael joined, but we were all friends.

Haha, the name came from us chatting one day during a lunch break in college about what movie extras say in the background, they constantly mouth ‘Rhubarb’ as it uses their whole mouth. We knew then that’s what we had to be called haha!

What goes through your head in the run-up of releasing new music? Are you excited, nervous, or both?!

To be honest, I feel everything! Excitement, pride, feel emotional because of how dedicated we are to music and the band. That’s the first thing we think about when we wake up and go to sleep at night. We all just hope that whatever new release that comes out is loved by our fans and hopefully it gains new fans too!

What are your first musical memories? And what was the lightbulb moment that made you go ‘I want to do that’?

My earliest memory of music was sitting on a potty in front of the television watching ‘The Who’ live video cassette my dad liked to watch (we still watch that very video to this day in fact haha) and I remember seeing Pete Townshend smash up a guitar and thought this is better than cartoons. Even though I was so young I knew this was amazing!

What album do you have in your collection or on your Spotify playlist which would surprise some people?

You ready for this… This One’s for You by Barry Manilow haha. Told you it was shocking, but diversity is the key as a musician!

How active are you on social media and where can people connect you?

We are a very interactive band, we care dearly for our fans online, updating them frequently with new releases, thanking reviewers and magazine, and pr for taking the time to talk about us or listen to us. It’s important to keep social media hot as more and more interest will come about! Hope you’re all safe, thank you for interviewing us, take care, and rock on! 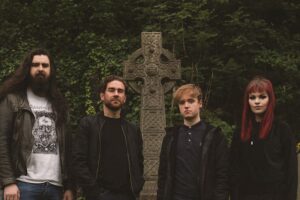 How did you feel performing your first gig?! And how was it?

Absolutely terrifying. It was at the Glasgow institution Nice’n’Sleazy. The crowd weren’t sure what to expect. Neither were we! Naturally, we blew their socks off!

Who would you class as the “ultimate” doom band?

A tough one! The ultimate doom band would probably be the love child of Sleep and Electric Wizard.

I think all of us will safely say it’s been our families that have just had such a positive influence on us all becoming musicians. Whether it’s been learning music from them from a young age or just their belief in us from the get-go, it’s really inspired us as musicians and as people.

Even though 2020 was rubbish, it still gave us Nothing as the Ideal by All Them Witches which has become a firm favourite!

What should people expect when they check the band out? How would you describe The Rhubarb?

Expect some heavy tones, slow chunky, doomy riffs with some faster sections in there accompanied by hard-hitting drums with some prog rock influences, and a nice mix of male and female vocals with some nice sounding harmonies here and there. We’ve been described as a mix of Black Sabbath and Fleetwood Mac.

Sometimes it’s the little things in life that make us smile, with that in mind, it must have been a buzz seeing the “Explicit” symbol next to “Drag Me To Hell” and “The Waters” on Spotify?!

It’s great, we don’t hold anything back when we say things we want to say anyway so I think it fits well. I just hope parents don’t punish their kids for listening to our “Explicit” music, if anything, they should be very proud of them.

Horrible question: Black Sabbath – Ozzy or Ronnie? Or both? (Defo not Ian Gillan!)

Ozzy. When I think of Black Sabbath, I always think of Ozzy Osbourne. He was the original and he’s on my favourite albums and songs. Actually, there was a time when I didn’t even know about the other guys which is kind of embarrassing.

What was the last gig you attended as a fan?

The last one was King Gizzard & the Lizard Wizard at the Barrowlands in Glasgow back in October 2019… it’s ridiculous how long ago that was, I JUST WANT LIVE MUSIC BACK!! PLEASE!! That was my first time seeing King Gizzard live and it definitely won’t be the last, it was incredible. 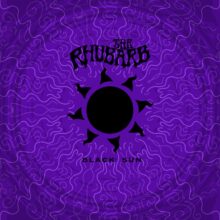 Our good friend Craig McKenzie from the band “Megalomatic”. He’s very talented, I’ve been to see his band live many times and I find myself listening to their music sometimes when I want something to listen to. I’ve jammed with Craig many times and it feels the same as jamming with the guys in The Rhubarb, it feels like music comes so naturally to him and I was always blown away by the stuff he came up with.

How long had the 4 songs that make up Black Sun been brewing before you recorded them?

Part-Time Suicide, The Waters and I’d Do Anything had been around for a very long time !! We’d been playing them live for years and were main staples in the sets we used to play! Drag Me To Hell, on the other hand, was a very fresh song for us. When Michael joined the band in 2017, he had written the majority of the riffs in and around the first couple of rehearsals we had! So when it came time to get in the studio and get stuff tracked, Drag Me To Hell was the first song we recorded!

In terms of a similar audience: Who would be the ideal act for The Rhubarb to support?

We all feel pretty strongly about racism and discrimination of any kind. Both of these issues really have no place in the world today at all. To think that one person could think that they’re better than someone else because of their colour of skin or gender or anything for that matter is just wrong.

We want to do so many things !! First of all, we’d love to get our EP Launch back on track after being cancelled from COVID. We’re also really excited to play the Reaction Management weekender! And we’re planning to get in to record a whole bunch of heavy riffs !!!

Connect with The Rhubarb here.