It’s unsurprising to hear Foster talk in such glowing terms about Dylan, and not just because, well, he’s Bob Dylan. Perhaps more than many other young bands these days, there is a deliberate low-fi, almost traditional rock’n’roll feel to the band’s music and aesthetic; The press has drawn comparisons between Foster and Mick Jagger, while others might look at the mops and leather jackets and immediately think of The Jam.” – GQ magazine on Hardwicke Circus 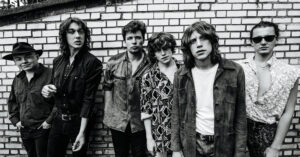 “If you drive into Carlisle,” says Hardwicke Circus frontman Jonny Foster, “the first roundabout you’ll hit is Hardwicke Circus. Whenever we’d travel anywhere, I’d say, ‘We’re from Carlisle,’ and the response would be, ‘Where the fuck is Carlisle?’ But there are no excuses now.”

Hardwicke Circus aren’t your average guitar band – a six-piece collective from the wilds of Carlisle, a band who value the song above the single, a group who have a sound soaked with the classic sounds of rock n roll history but still sound completely of the moment, individuals channelling their differences into a similarity to become more than themselves. But more of that later…

Debut single “Walking On Broken Glass” is a distillation of the band’s unique sound. Infectious melodies laid over classic-sounding rock n roll, but infused with a true punk spirit. The single features a video shot by the band themselves in lockdown.

The forthcoming album is a collection of songs about growing up in the in-between. From a town you only end up in by accident.

The band have honed their craft on the road. With over 700 gigs under their belt, including supports to Neil Young, Bob Dylan and Alabama 3, they had 165 shows lined up for 2020 including SXSW. When the touring was cancelled the band ended up writing and recording their debut album in a remote farmhouse in the Yorkshire Dales on a hill above the river Swale (a la Withnail And I}. But more of that later…

An insight into the mind and influence of the band can be gleaned through the radio show presented by Jonny Foster, which was put together for their Patreon followers here.

The band live streamed a full gig in July 2020 which you can see HERE.

The single and album will be released through the band’s own label, Alternative Facts Records.

“Walking On Broken Glass” is out now. It will be available as a stand-alone single and also as an instant grat on advance purchase of the album.