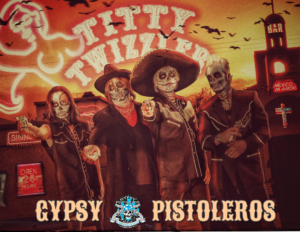 The amazing Gypsy Pistoleros have not only released a brand new video but are the newest members of the Off Yer Rocka label family. Dubbed The World’s Greatest Flamenco Sleaze Glam Rock ‘N’ Roll Band Ever, the Tarantinoesque sleaze bandits have shot their way onto the latest label imprint Heavy Rocka Recordings, and bring you the video for their brand new single “The Names Django”.

” We are totally thrilled to have joined the Hard Rock Hell Empire, by signing to Off yer Rocka (Heavy Rocka Records) The support their D.J’s and community have given us, has been incredible. It was a perfect fit, they have totally embraced the Pistoleros unique Flamenco, Punk, Rumba Rock n Roll phenomena. We cant wait to release more music and celebrate with everyone at the upcoming Festivals.” said singer, Gypsy Lee Pistolero.

“Deputised by the Devil himself the Gypsy Pistoleros must hunt down 999 demonic souls to earn their freedom from the curse. The Devil’s fine print says for every soul collected should an innocent die 3 more are added to the list! Time to settle the bill!”

Live Tour & Festival dates will be announced as confirmed! 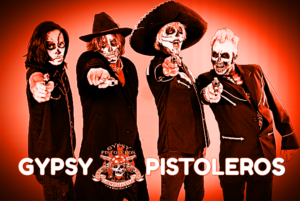 Gypsy Pistoleros are best described as being the ideal house band for the fictitious Titty Twister bar of Rodriguez’s From Dusk till Dawn. Between the nods to Morricone’s tense, tumbleweed atmospheres and the Gypsy Kings’ manic Mediterranean energy, a New York Dolls raw glam spark and a surplus of prime G ’n’ R attitude, the Pistoleros‘ sonic style is captured to the full with the release of an album they have always threatened!

“Once in a while something special comes along and turns the musical world on its axis and makes you listen to music and lyrics in a totally different way. That something is Gypsy Pistoleros.” _ WeBleedMusic

“Gypsy Pistoleros are a thrill-a-minute collection of melodic eye-patch swagger that smells of exotic spices and forbidden concubines. The Gypsy Pistoleros sound like Hanoi Rocks, if Hanoi Rocks were sultans and snakecharmers.” – Sleazegrinder-Classic Rock Magazine

“This, actually, is as good as sleaze ever got in the last decade. Gypsy Pistoleros were, and still are, a breath of fresh air. You will never hear another band like this. They are the greatest flamenco sleaze glam band ever.” Maximum Volume Music – Andrew Thorley

“Can you imagine Sleaze, Glam, Hard Rock, Punk and some Flamenco rolled into one with a whole lot of Spanish attitude oozing out it? Imagine no more – The Gypsy Pistoleros will give it all to you, and you will love every minute of it and want to reach for a tequila shot”.- ***** Michele Storm Hairspray Heaven

“GYPSY PISTOLEROS have been carving out a unique niche for themselves in the crazy world of rock n’ roll. From the New York Dolls to Guns N’ Roses via El Bronco the Gypsy Pistoleros have got a stunning TexMex thing going on. Gypsy Pistoleros are the undisputed kings of Flamenco Sleaze”- Pulse Alternative Magazine 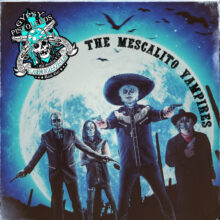 This mongrel offspring of fiery flamenco/rumba passion and gritty gutter glam, was born roamin’ somewhere between Barcelona and Worcester. Standing alone in musical ancestry and sum sound, they are one of those rarest acts who can honestly claim the tag ‘unique’

OUT NOW – First Single ‘Lost in a Town called Nowhere’ (B side – Soho Daze, just another Friday Night)

Gypsy Pistoleros line up is –