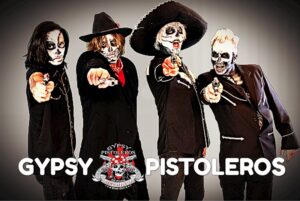 GYPSY PISTOLEROS have released a brand new single and anthem for the underdog ‘Lost in a Town called Nowhere!’, the first track taken from upcoming new album, ‘The Mescalito Vampires’ to be released via Golden Robot/RIOT Records in June.

Gypsy Pistoleros are best described as being the ideal house band for the fictitious Titty Twister bar of Rodriguez’s From Dusk till Dawn. Between the nods to Morricone’s tense, tumbleweed atmospheres and the Gypsy Kings’ manic Mediterranean energy, a New York Dolls raw glam spark and a surplus of prime G ‘n’ R attitude, the Pistoleros’ sonic style is captured to the full with the release of an album they have always threatened!

“Gypsy Pistoleros were, and still are, a breath of fresh air. You will never hear another band like this. They are the greatest flamenco sleaze glam band ever. And that’s just a fact. If you don’t believe me, listen to this.”

“Can you imagine Sleaze, Glam, Hard Rock, Punk and some Flamenco rolled into one with a whole lot of Spanish attitude oozing out it? Imagine no more – The Gypsy Pistoleros will give it all to you, and you will love every minute of it and want to reach for a tequila shot”.

“GYPSY PISTOLEROS have been carving out a unique niche for themselves in the crazy world of rock n’ roll. From the New York Dolls to Guns N’ Roses via El Bronco the Gypsy Pistoleros have got a stunning TexMex thing going on. Gypsy Pistoleros are the undisputed kings of Flamenco Sleaze” 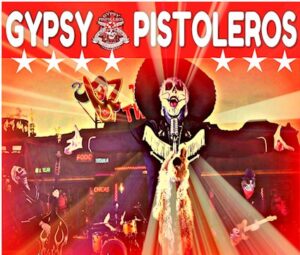 This mongrel offspring of fiery flamenco/rumba passion and gritty gutter glam, was born roamin’ somewhere between Barcelona and Worcester. Standing alone in musical ancestry and sum sound, they are one of those most rare acts who can honestly claim the tag ‘unique’