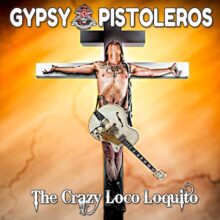 The Crazy Loco Loquito is the new single from UK’s GYPSY PISTOLEROS, released on 20th July. GYPSY PISTOLEROS are something truly unique and interesting in today’s predictable musical landscape. A sound and style that mixes sleazy glam punk rock with flamenco influences.

The Crazy Loco Loquito is the follow-up single to the recent single, Una Para Todo es Bandido and taken from their upcoming album The Greatest Flamenco Sleaze Glam Band Ever: The 18 Track Anthology

“Gypsy Pistoleros are a thrill-a-minute collection of melodic eye-patch swagger that smells of exotic spices and forbidden concubines. The Gypsy Pistoleros sound like Hanoi Rocks, if Hanoi Rocks were sultans and snakecharmers.”
– Sleazegrinder, Classic Rock Magazine

“As crystal and as ballsy as the local chapter of the Hells Angels, if the Angels were playing at a Mexican wedding, fantastic stuff, with gritty Mexican dust and magic oozing from every pore. A band that are legitimately doing something completely original and exciting.” – Shane, The Rockpit

ABOUT GYPSY PISTOLEROS
GYPSY PISTOLEROS are still something truly unique and interesting in today’s predictable musical landscape. A sound and style that mixes sleazy glam punk rock with flamenco influences with a shout out to Mexican folklore and Spanish tendencies.

GYPSY PISTOLEROS may be best described as being the ideal house band for the fictitious Titty Twister bar of Rodriguez’s From Dusk Till Dawn. Between the nods to Morricone’s tense, tumbleweed atmospheres and the Gypsy Kings’ manic Mediterranean energy, a New York Dolls raw glam spark and a surplus of prime G ‘n’ R attitude, the Pistoleros’ sonic style has roots has a widespread as the global fanbase it’s been gathering since they began playing in 2005.

The sound is flamenco in a head on collision with punk/rock riffs, pounding bass and thrashing drums. The songs span madly in the best rock ‘n’ roll tradition with big hooks, attitude, and sleaze. Yet those flamenco breaks got into your head and refused to leave – this hybrid rocks.

This mongrel offspring of fiery flamenco passion and gritty gutter glam, the GYPSY PISTOLEROS’ were born roamin’ somewhere between Barcelona and Birmingham, brought into the world to a soundtrack stack-heeled anthems of sleazy ’70s America. Standing alone in musical ancestry and sum sound, they were one one of those most rare acts who can honestly claim the tag ‘unique’.

The insane inspiration came from frontman and songwriter Gypsy Lee Pistolero who began wielding this unique sound whilst living in Zaragoza (Spain) whilst supporting The Ramones and Motorhead in 1993 & 1996.

They are already recording a brand-new album ‘The Mescalito Vampires!’  in Black Tree Recording Studios, with guitarist Mark Westwood engineering & producing (The Beat, Dogs D’Amour, Hazel O’Connor, Dreadzone, etc) which will be released toward the end of the year. An alternative mix will be done by Joe Gibb (David Bowie, The Cure, The Kinks, Janes Addiction, Catatonia, etc.)