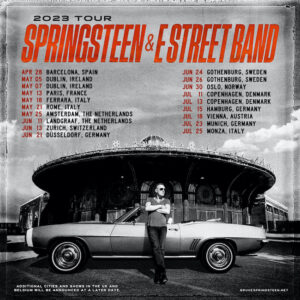 Bruce Springsteen and The E Street Band will mark their return to the road in early February 2023 with a string of to-be-announced US arena dates, followed by European stadium shows kicking off on 28th April in Barcelona and a second North American tour leg starting in August.

These 2023 dates will mark the first live shows for Bruce Springsteen and The E Street Band since the conclusion of their 14-month, worldwide The River Tour in Australia in February 2017. The River Tour was named 2016’s top global tour by both Billboard and Pollstar. 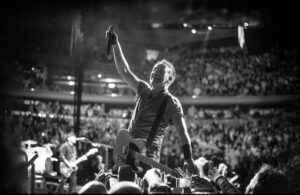 Bruce Springsteen and The E Street Band last reconnected to perform on Saturday Night Live in December 2020, where they launched live versions of two songs from their most recent studio album ‘Letter To You’ (Columbia Records), which reached #1 in eleven countries and marked the band’s first time recording live together in decades. Last year, Springsteen unveiled his never-before-released ‘The Legendary 1979 No Nukes Concerts’ film, collaborated with President Barack Obama on the book ‘Renegades: Born In The USA’ and reprised his record setting show ‘Springsteen On Broadway’ to help reopen New York City theatres last summer.