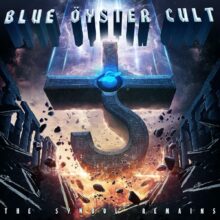 The first new studio album by Blue Öyster Cult in almost two decades is out today (9th October). Entitled ‘The Symbol Remains’, it showcases a group that hasn’t been slowed by the passing of time but is simply unphased by it, resulting in one of their most spirited, diverse and inspired efforts ever. A video for the song ‘The Alchemist’ is also available now. Written by Richie Castellano, it is masterfully sung by Eric Bloom.

“It’s all good, and in places great. There’s something here for everybody on this very solid return to past glories 8/10”
CLASSIC ROCK

“An incredible achievement, sounding current, relevant and fresh whilst delivering a surprise twist along the way”
FIREWORKS

“‘It finds a band with their sardonic humour, lurid pulp fascinations and ability to jam intact”
THE WIRE

Containing fourteen new songs, ‘The Symbol Remains’ is packed with killer riffs, sweet harmonies, crunchy guitars and a dash of twang. The album captures, at long last, the creative side of a band that has been playing shows on the road consistently for nearly two decades. It also offers a palette of sonic variety and interesting song topics, including sword and sorcery, vampires, modern technology and apathetic bar brawls, courtesy of lyricist John Shirley, a frequent contributor to the band’s later catalogue, as well as O.G. back-in-the-day writer Richard Meltzer – author of some of BÖC’s most cryptic lyrics. There is also a special surprise with an appearance by founding member Albert Bouchard, who returns to add percussion (cowbell, of course) and backing vocals to the opening song, ‘That Was Me’.

Lead guitarist Buck Dharma wrote six of the tracks, including ‘Box In My Head’, an earworm of a song that is rich in melody and intricate vocal harmonies, and contains an almost-hidden little ‘easter egg’ in its nod to the song ‘Brandy’ by Looking Glass. Of the contributions by guitarist Richie Castellano, the palace intrigue of ‘The Alchemist’ lyric matches perfectly with the sinister music and is a standout track. Jules Radino also contributes a song with the hard-rocking ‘There’s A Crime’.

Both Dharma and Castellano share lead guitar duties, weaving in and around each other, their personal styles representing both the classic melodic and modern aspects of superior guitar playing.

Mixed by master engineer Tom Lord-Alge, the album packs a punch and is a record that is extremely diverse yet continually rocks hard. Blue Öyster Cult is BACK!

Formed on Long Island in New York State in 1967, Blue Öyster Cult are best known for their massive singles ‘(Don’t Fear) The Reaper’, ‘Burnin’ for You’ and ‘Godzilla’. Riff-heavy and head-banging while intelligently hook-laden, they remain a constant touring presence and as relevant as ever. Genre-benders who pioneered the heavy metal style while providing inspiration to psychedelic jam bands and arena rockers alike, BÖC are a highly respected classic rock act with a mightily impressive discography. Their songs have been covered by a multitude of other artists across numerous genres – from Metallica to Patti Smith Group, Apollo 440 to Current 93 – proof if it were needed of the wide-ranging influence of their music.

THE SYMBOL REMAINS
TRACKLISTING
1 That Was Me
2 Box In My Head
3 Tainted Blood
4 Nightmare Epiphany
5 Edge Of The World
6 The Machine
7 Train True (Lennie’s Song)
8 The Return Of St. Cecilia
9 Stand And Fight
10 Florida Man
11 The Alchemist
12 Secret Road
13 There’s A Crime
14 Fight