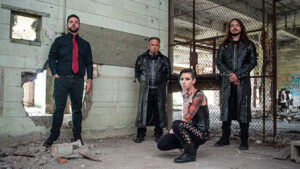 Throughout lockdown, the New Wave of Classic Rock group on Facebook has performed a valuable service in giving bands and musicians within the genre an outlet and income with a series of webfests and other online opportunities. Unfortunately, the very nature of lockdown has meant a rather more difficult time carrying out another of its roles in bringing new bands and albums to the attention of the 20,000 plus members as recording and playing together has been discouraged in so many places.

It is an aspect of the group that I value greatly. That ability to click on a link and find a new sound. Not all the bands that appear appeal, that is one of the joys of a diverse music scene, but every now and then one grabs my ears and rams them against the speakers. My YouTube or Spotify app develops a mind of its own and turns the volume up and I find myself singing along in the car for days afterward, waiting for another new track to appear and eagerly anticipating that final release of a new album.

Three months ago a link appeared to a song called “Nothing Left” by a band called “Hearts & Hand Grenades”. “Cool name” I thought. I’ll give it a go.
It opened with a chugging bass and guitar riff, developed with a ringing lick, and then exploded with a raw growly vocal and I was hooked. The other half wandered into the kitchen. “Ooohhh, that’s a bit good! Who’s that?” By the time we reached the guitar solo, we were both nodding along and I had reached for the phone to add the track to my favourites playlist. A quick check and apparently they were an ex-cover band from Buffalo in the States (cue disappointment as I realised I wouldn’t be seeing them at a local gig any time soon).

Fast forward a few weeks and another video appeared. “The In Crowd”. Now, if the first track was a down and dirty rocker this came as a complete surprise. Opening with a syncopated and sassy guitar and vocal it is simply sleazy. A brief pause and “Bam!” The song rips into an almost psychobilly chorus before slithering back to that delicious, almost basement jazz tease. Watching the band play this live is going to be messy, sweaty and so much fun. 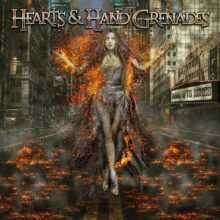 The final release, just before the album, was the title track “Turning to Ashes”. Different again with a more complex harmonic vocal and a pace that doesn’t let up from start to finish. By now I had a Hearts & Hand Grenades playlist and was dying to hear the rest of the album. Since it arrived it has been the playlist for my journey to work and somehow I always arrive feeling full of energy and smiling, so many of the tracks are earworms!

Vocalist (not to mention thunderous bass player) Stephanie Wlosinki manages to sing everything from the aforementioned smooth jazzy lines in “The In Crowd” to growls and screams that would do credit to Lzzy Hale. Kenny Blesy and Mike Bress rip out some great solos and layers of powerful rock/punk rhythms and drummer Tom Lafferty builds a rock-solid foundation for the sheer variety of the songwriting that at times reminds me of “Four Non Blondes”/Lynda Perry where every song is distinctly different rather than being small changes to a formula. The production by Justin Rose is part of the success of the album, lending clarity and depth to every track and sounding good on every playback device I have so far thrown at it.

What about the rest of the album now it has arrived?

“For the Weakened” is dark and doom-laden with a blistering solo, takes a short atmospheric break before closing with the demand to “raise your fists”. “Daggers” explodes with life and canters along at a great pace. “I Hide” slows the pace back down with a harmonic vocal and low arpeggio, “Adrenaline” is just that, as just when you think it is a more generic rocker it surges forward faster and faster and I found myself imagining the carnage it will cause played live. Finally, “My Sickness” is a mini-epic all of its own that closes the album yet also seems to lead into the first track (although that is probably because since putting it on I have had it on repeat the entire time!).

Who knows how long it will be before bands from the States are able to tour the UK, especially new ones who will be focussed on getting a fanbase at home, but I really hope some enterprising promoter takes a chance and brings them over here soon as I am already imagining just how good the live set will be.

‘Turning To Ashes’ is available now through Eclipse Records.