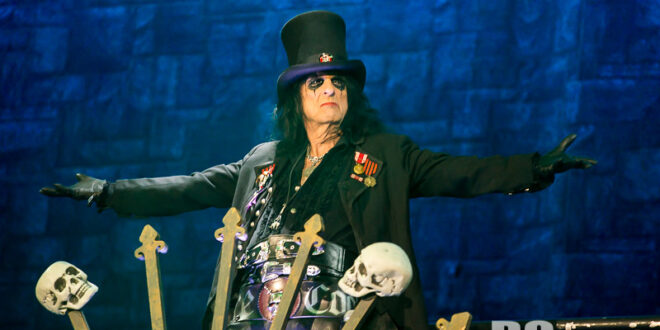 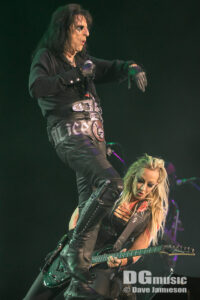 For some artists, the reality of an enforced period of time off the road didn’t really make much difference due to the fact that they might only perform every few years. But for a perennial road warrior like Alice Cooper, the worldwide shutdown of live entertainment was a tough pill to swallow. As sure as the sun rises in the morning, and sets in the evening, you could bet your house on Alice Cooper coming to a city near you whether you live in the US, UK, or Europe. And to paraphrase one of the deep cuts that Cooper aired on 2019’s ‘Nightmare Castle’ tour: he’s back. He’s finally back.

Although it has been a few years since the aforementioned ‘Nightmare Castle’ tour, that new production was in its infancy when the lockdown struck and was therefore robbed of an entire tour cycle, hence this new Alice Cooper tour is a continuation of the same production. Same production with a few new party tricks, and a refreshed setlist. In this co-headlining format with The Cult (Alice closes each night), time is of the essence and no one is hanging around. Cooper-newbies might be surprised that he doesn’t speak to the audience until band introductions at the end of the evening, but zero chit-chat means that the band can bulldoze their way through six decades of music in a twenty-song setlist that raises the arm hairs on numerous occasions. 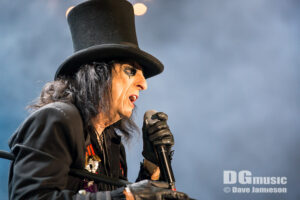 The opening salvo of ‘Feed My Frankenstein’ (complete with a visit from you-know-who), ‘No More Mr. Nice Guy’, and ‘Bed Of Nails’ is the same as the 2019 tour, but maybe it is because of the enforced lay-off, or the fact that Alice is back overseas, but both Alice and his incredible band seem to have moved it up a gear or two and are playing with an added shot of energy. Alice sounds amazing. In a time when social media is highlighting how some industry veterans are struggling with their vocals, and some even have to deny piping vocals in to help out, it’s fantastic to see (and hear) that his vocals are better than ever. Once the opening shots are fired, the setlist from 2019 changes, and Alice leads the band into the opening chants of ‘Hey Stoopid’, which is followed by three Cooper cuts from the last few studio albums; the Billy Gibbons swagger of ‘Fallen In Love’ from 2017’s ‘Paranormal’ and a sweet one-two of ‘Shut Up and Rock’ and ‘Go Man Go’ from 2021’s stunning ‘Detroit Stories’. With landmark album ‘Killer’ turning fifty last year, ‘Under My Wheels’ (complete with Chuck Berry-style duckwalk from guitarist Ryan Roxie) lines up alongside fellow-mainstay ‘Dead Babies’, and the day that either start-up and goosebumps don’t form, then its time to check the pulse. 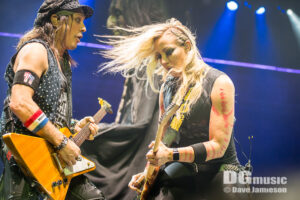 Alice always likes to throw his long term fans a bone or two, and 2019 saw ‘Roses On White Lace’ from 1987’s ‘Raise Your Fist And Yell’ album dusted off, and such was the reaction from those who hadn’t witnessed it in decades, that it has kept its place in the set. One of Cooper’s heavier moments, it’s a guitar-tastic few minutes, and thankfully Alice has three stunning lead guitarists on hand; take a bow Tommy Henriksen, Ryan Roxie, and Hurricane Nita Strauss (who provides the fireworks with a short, but dazzling guitar solo). Once the fiery trio of ‘I’m Eighteen’, ‘Poison’, and ‘Billion Dollar Babies’ finishes, and the rafters stop shaking from the sound of thousands of happy punters singing at the top of their voices, the band is given the chance to shine with a stop off at 1975’s ‘Welcome To My Nightmare’ album with first of all ‘Devils Food’, and then a short jam on ‘Black Widow’ which has Mr. Beast Blanco himself bassist Chuck Garric leading the charge, before Glen Sobel shows why he is regarded as one of the best drummers in rock music today. The chemistry between the band is there for all to see, and the interaction between themselves, as well as with Alice, is a thrill to see. Great understanding between all of them, especially when they line up alongside Alice on the raised stage front; Alice in the middle, two guitarists on either side of him, all in perfect harmony. Together they make for a formidable band and it would be fair to say that they are a hard rock version of the fabled E-Street Band. A band in the truest sense of the word. 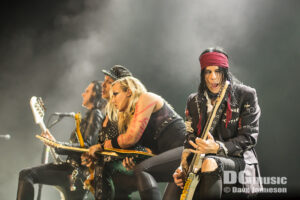 The pace throughout the set is relentless, characters come and go, Mrs. Cooper – Sheryl – makes an appearance, as do some creepy looking babies, and once Alice pays the ultimate price and is beheaded, he’s back front and center for the total blast which is ‘Escape’. It’s easy to get wrapped up in all the theatrics, and they are as strong as ever, but the heart of the show is the music, and tonight is a perfect example of how to pace a show, and put together a strong setlist for everyone. Sure, some more material from ‘Detroit Stories’ would have been the cherry on top, but after a riotous ‘School’s Out’ brings the show to a conclusion, and Alice thanks the crowd for coming out, even the most cynical of cynics would have been forced to admit that this was pretty much the perfect show. Alice Cooper, the man behind the makeup – he’s back, and in this form, and with this band alongside him, he has many more years in him as one of those live entertainers not-to-be-missed.

Special mention should go to opening act Creeper who – despite coming on when so many were still either in the over-priced bars or waiting to be patted down on the way in – put on a dazzling 25-minute set that was the perfect fit for an army of grizzled Alice Cooper veterans. The Southampton-based outfit had nothing to lose and ran with it and left the stage with plenty of fresh converts to their cause.

All forthcoming tour dates can be found here.