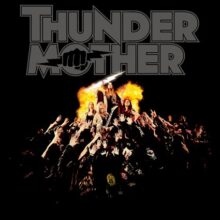 THUNDERMOTHER have released their new single ‘Sleep’, out now on AFM Records. Guernica Mancini gives this striking rock ballad a unique touch with her beautiful blues-soaked voice and you can check out the new video for ‘Sleep’ above.

The band’s upcoming new album ‘Heat Wave’, due for release on 31st July, is the musical expression of the lifestyle of the Swedish high voltage rock’n’rollers: Thundermother don’t just play rock’n’roll. Thundermother are rock’n’roll! Be ready,

Thundermother from Stockholm are the breathing and living embodiment of rock ‘n’ roll. Founded in 2009 by guitar-heroine Filippa Nässil, the band started their steep rise on the international stage after singer extraordinaire, Guernica Mancini, joined two years ago. With her blues-soaked voice that has invited comparison to several classic queens of rock music, these Swedish ladies have hit the jackpot. Driven by the hard-hitting pounding of drummer Emlee Johansson, these heavy rocking girls are sticking it to anyone claiming that rock ‘n’ roll is a male domain. Front woman Guernica Mancini states: “On stage we are musicians – no matter if man or woman.“

Touring relentlessly and with three albums under their belt, Thundermother are currently gearing up for the release of their highly anticipated fourth album, ‘Heat Wave’ which will be released on 31st July on AFM Records.

Connect with the band here –