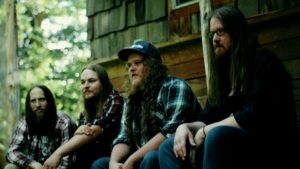 Montana based hard rock quartet Stranded By Choice is back with their third studio album ‘Lost By Design’ which is set for release August 28th, 2020. The band recently released a snippet of the album with their new video ‘Ground Hog’ which has been well received amongst their fan base.

The album boasts heavy riffs, soaring vocals, and crushing grooves. It’s a wonderful mix of country-style rock, hard rock and in parts, has a metal infusion.

Stranded By Choice was formed over a decade ago against the rugged backdrop of central Montana. In an area where the vast plains meet the mountains and the mountains meet the sky, the veteran rockers have successfully captured the intensity and magnitude of the landscape from which they were forged.

Throughout the years Stranded By Choice has refined its unique blend of classic rock, metal, and country, both on the road and in the studio. With a thick
dual guitar sound and a simplistic yet powerful approach to their songwriting, SBC creates music that is catchy, listenable, and heavy.

While the influence of classic bands like Black Sabbath, Mountain, and Thin Lizzy is obvious in both their studio albums and live shows, the band also pulls
heavily from bands like Red Fang, Clutch, and Mastodon. This diverse approach allows Stranded By Choice to fit comfortably on a wide range of bills, from punk
to metal and beyond.

2020 marks the release of Stranded By Choice’s third full-length album Lost By Design. Perhaps their best effort yet, Lost By Design perfectly captures the SBC
sound. The album is accompanied by a music video for the new single “Groundhog” which like all of their videos was filmed on a working hay farm. This
literal backyard imagery creates a stunning visual accompaniment to the band’s music.

Stranded By Choice has toured the Northwest and Canada extensively and has shared the stage with Red Fang, Kylesa, Blacktop Mojo, Stabbing Westward,
Black Wizard, Conan, The Kyle Gass Band, D.O.A., and many more great bands.

“We had no sort of time crunch when making this album and that allowed us to really take a step back and get a clear vision of what we wanted to achieve. We recorded most of the songs as demos first then made changes and refined them before the actual tracking. By doing that we let the song grow and develop naturally instead of just forcing out ideas. As a result, I think we’ve achieved our most creative and authentic album yet.”