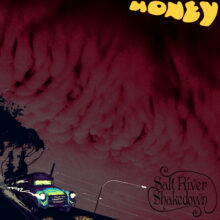 Salt River Shakedown have been tearing down the UK gigging circuit with their energetic brand of blues-rock for the last few years. Having played alongside such bands as Anchor Lane, Crobot, The Lazys, and US blues-rocker Jared James Nichols, they have developed a reputation for an explosive show.

With the introduction last year of new vocalist Griff, and brand new keys player Clayton expanding the band into a 5 piece for the first time, and the success of their most recent singles Sign Of The Times and Fight or Flight under their belt, the band are primed ready to unleash more riffy goodness onto the world with their brand new single Honey.

Honey is an explosive track. Heavy riffs pound away during the verses, giving way to a huge, catchy chorus with a grunge edge. As usual, the band takes a very hands-on approach with guitarist Alek McMillan recording and producing the track himself, and with a very energetic new music video directed and edited by the band’s drummer Jake Mackie-Duncan.

“This is a song that’s been cooking away in the background for some time now, and Salt River Shakedown are so excited to finally get it out into the world.”