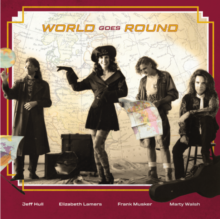 For once the phrase “an album decades in the making” really does mean that. Made up of musicians who had written, recorded, and performed with artists as diverse as John Fogerty, Air Supply, John Denver, Linda Ronstadt, Chaka Khan, Quincy Jones, Kenny Rogers, Supertramp, Donna Summer, and Neil Diamond, World Goes Round got together in 1989 to make an album. An album that until now has never seen the light of day.

Marty Walsh (guitar) was approached by the project’s original producer, multi-Grammy Award and Emmy Award-winning Tommy Vicari, and asked if he still had copies of the recordings. Walsh looked out cassette recordings of the tracks and through modern technology was able to convert them to enable Vicari to remaster them for a digital and vinyl release, some thirty-odd years after they were first recorded. In doing so, the members of World Goes Around: Marty Walsh, along with Frank Musker (co-lead vocals), Elizabeth Lamers (co-lead vocals), and Jeff Hull (keyboards/drums/bass guitar) have reconnected with each other after decades.

The late ’80s was the golden era of pop music, and ‘World Goes Round’ is very much “of that era”. The slick production and hi-sheen of tracks like Glenn Frey’s ‘The Heat is On’, ‘We Don’t Have to Take Our Clothes Off’ from Jermaine Stewart, and ‘The Power of Love’ from Huey Lewis and The News summed up one aspect of the ‘80s and it’s this aspect which runs through the ten tracks on ‘World Goes Round’. Opening track ‘Rebel Heart’ is the perfect example; lighter-than-light, uplifting vibe with great dual vocals, and simple, melodic hooks that linger on for days afterward. The type of track that could have played over a montage sequence from a movie like ‘Mannequin’ or ‘The Secret of My Success’. ‘Great Talker’ has that Sheila E-meets-Nile Rodgers mix of pop and funk which was prevalent during the era – fantastic basslines from Hull. ‘Put It On The Line’ is a high-class piece of light AOR in a Mr. Mister vein, and, thanks to a thought-provoking video, is scarily timely, considering that it’s over 30 years old. ‘Please Please’ is a hopeful call-to-arms about not giving up and features a lovely, light guitar tone throughout. ‘Big House’ is perhaps the standout track of the ten; well-written, well-produced, and well-performed.

‘World Goes Round’ is a perfect snapshot of what music in the ’80s was like for so many. The pop-culture scene was everywhere, and this album will undoubtedly spark a memory or two for anyone who remembers the days of Miami Vice, Beverly Hills Cop, and big shoulder pads.

Previous Fish: How Brexit Has Destroyed UK Artists’ Ability To Tour The EU
Next The Stranglers: Tour rescheduled to 2022