Review: Walking Papers – ‘The Light Below’ 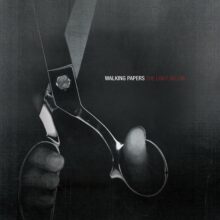 Eschewing the bluesier, classic rock ‘n’ roll sound which arrived with 2018’s ‘WP2’ album, Seattle outfit Walking Papers have instead turned left on new album ‘The Light Below’ and embarked down a darker, more intense path. Always more than simply a meat and two veg band, Walking Papers constantly surprise, and with ‘The Light Below’ the band has pulled off their biggest surprise to date by practically reinventing themselves.

With maverick singer-songwriter and guitarist Jeff Angell at the helm, it’s a case of expecting the unexpected with ‘The Light Below’. Check your inhibitions at the door, nothing is what it seems, and at times the only thing missing is Michael J. Anderson from Twin Peaks doing that freaky-as-fuck dance before jumping on your lap and asking you if you are alright (he’s talking backward of course). It’s an expansive, lengthy album, where no-one is in a rush to get to where they are going. The journey is crucial, and there are many different stop-offs along the way. It’s vast in places. Hugely cinematic. Listening to ‘My Thoughts Are Not My Own’, and at times, thanks to Angell’s wonderfully expressive guitar playing, it’s almost like Dave Gilmour scoring a Michael Mann movie. In the case of the instrumental ‘The Other Shoe (Reprise)’; it’s saxophonist Gregor Lothian scoring Pacino chasing down De Niro in the blinding neon lights of Mann’s L.A. in ‘Heat’. Simply beautiful.

The scene is set early doors with the brooding, synth-laden opening track ‘The Value of Zero’. A head-swirling, slow-burning gem of a track where you might pick up a hint of a John Carpenter influence from Benjamin Anderson’s majestic keyboard performance. ‘What Did You Expect’ follows on with a touch of The Mode, and along with ‘Rich Man’s War’, is perhaps the most upbeat moment on the album. The light industrial-tinges of ‘Creation, Reproduction and Death’ comes as a surprise, but with Walking Papers constantly evolving and refusing to hang their wet coat on one particular peg, should anyone really be surprised when they mix it up? Likewise, just when you think that you’ve got ‘Money Isn’t Everything’ figured out, a dark foreboding piano tone crashes in and the track takes on a more sinister note.

The bonafide, stop-you-in-your-tracks moment is the glorious one-two of ‘Divine Intervention’ followed by ‘Stood Up On The Gates Of Heaven’. 12 minutes that seamlessly bleed into each other, so much so that you can now feed your soul at the same time as blitzing your retinas with a mini-movie featuring both tracks as one killer piece of art. Swampy guitar during the intro, a Levee Breaks (of sorts) feel to Will Andrews’ sublime drum sound, Anderson’s subtle, atmospheric keyboard sound is as impressive as ever, and Angell delivers his warm, authentic vocals with the same air of mystery and menace that has made him stand out from the pack for years now. Need more convincing? Here comes guest-player Dean DeLeo of Stone Temple Pilots with one glorious guitar solo after another. 12 gorgeous minutes where to be honest, there aren’t enough superlatives in the dictionary to describe. Although ‘The Light Below’ is very much an album in the truest sense, these two, back-to-back, stand on their own two feet, daring anyone to try to knock them over.

‘The Light Below’ is available now, an incredible collection of music, and an album to devour. Expect this one to feature heavily in end of year best-of polls.

Check out ‘The Light Below’ here.