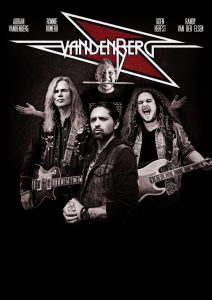 Vandenberg is back! Three little words to warm the cockles of the hearts of many a Whitesnake fan. As much as a great showman and player as Steve Vai was, for many Whitesnake fans the ‘Slip Of The Tongue’ era was all about the Flying Dutchman himself: Adrian Vandenberg. And now after 35 years, the guitar maestro has resurrected the pre-Whitesnake outfit that shared his famous surname.

Vandenberg in 2020 offers up a new line-up, as well as a corking new studio album. Pairing with current Ritchie Blackmore’s Rainbow vocalist Ronnie Romero was a wise move, and given the Deep Purple family tree connection, it seemed inevitable that the pair would work together. Completing the line-up of Vandenberg 2020 are the backbone of the band, powerhouse drummer Koen Herfst and his partner in crime; bassist Randy van der Elsen.

With his hard-hitting drum work it’s Herfst that brings ‘2020’ into the world kicking and screaming. Opening track ‘Shadows Of The Night’ is an instant shot of adrenaline. An apocalyptic drum intro that doff’s its hat to the much missed Cozy Powell, speeding, muscular riffs, and then the jaw-dropping vocals from Romero that brought him to Blackmore’s attention. Boom! As far as opening tracks go, this is Adrian Vandenberg delivering a fantastic statement of intent that serves notice to anyone who thought that Vandenberg would stick with the melodic rock sound that the band were famous for in the early ‘80’s. In essence it’s ‘Rainbow Rising’ with 2020 production standards. 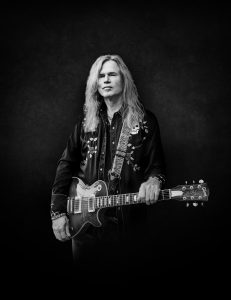 The pace only slows a notch or two for ‘Freight Train’, which has a killer bass tone, a monstrous drum sound and enough fiery solo’s to see the air-guitar dusted off. Adrian Vandenberg is clearly having fun, and he plays with such a strong sense of feeling and soul that it puts numerous shredders to shame. ‘Hell and High Water’ is back on ‘Rainbow Rising’ territory and the ‘Stargazer’ vibe is strong with this one. The fact that Vandenberg and Romero wear their influences so proudly on their sleeves is refreshing, why try and hide your influences when your influences are some of the greatest hard rock bands ever? So you will hear plenty of British influences throughout ‘2020’; Deep Purple and their offshoots, Whitesnake, Cream, Zeppelin, all present and correct. ‘Let It Rain’, ‘Shout’ and ‘Shitstorm’ being just a few fantastic examples of the Whitesnake influence while ‘Ride Like The Wind’ is all Blackmore ‘Gates Of Babylon’-sized fireworks and ‘Skyfall’ has traces of each influence on a track that gets better with each listen.

The ‘80’s were of course the golden era of the power ballad, and Vandenberg had their own ‘Is This Love’ in the shape of ‘Burning Heart’, and the classic gets a fresh coat of paint 38 years later with Ronnie Romero at the helm. One of a handful of “power ballad” benchmarks, ‘Burning Heart’ has all the emotion that you would come to expect from a power ballad, and it’s a real thrill to hear it reinvigorated for ‘2020’.

Any self-respecting fan of ‘70’s hard rock will surely drool over this album?

Previous Review: The Outlaw Orchestra – ‘Pantomime Villains’
Next The Quireboys: ‘A Bit Of What You Fancy’ 30th Anniversary Tour