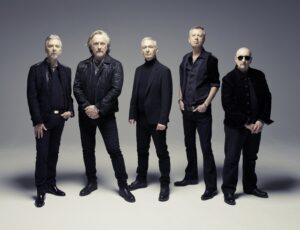 Since returning with ‘Wonder Days’ in 2015, British rock stalwarts Thunder have gone on one almighty run of form that shows zero sign of abating. Five albums in eleven years is a pretty good return for any band (although, King Gizzard would laugh that amount off as pitiful), but what is even more impressive is the quality of the albums in question. And as much as 1990’s debut album ‘Backstreet Symphony’ is often considered to be THE definite Thunder album, 2021’s ‘All The Right Noises’ was strong enough to put a difficult question to the Thunder fanbase: “Is this Thunder’s best album to date?” Coming thirteen months after ‘All The Right Noises’, Thunder returns with ‘Dopamine’, a brand-new studio album, and a double album no less, their first (you won’t be the only person who runs to their copy of 1992’s ‘Laughing On Judgement Day’, certain that it was a double album). Faced with some difficult decisions about which songs to cut from the album, Thunder decided; sod it, let’s go with a double, and the end result is sixteen slices of Thunder heaven. 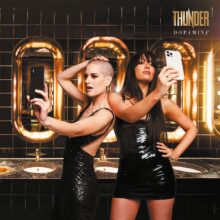 Like ‘All The Right Noises’ and its opening track ‘Last One Turn Off The Lights’, ‘Dopamine’ also begins with an instant shot of adrenaline. In this case, it is the percussive slap-in-the-face of ‘The Western Sky’, a track that honestly sounds like the listener is privy to their own front-room Thunder performance – the production from guitarist-songwriter-producer Luke Morley as faultless as ever. Packing the trademark Thunder groove, and with vocalist Danny Bowes making it seem effortless – as well as a gorgeous ‘Gates Of Babylon’ Blackmore-like extended guitar solo from Luke Morley – it’s a fantastic way to open the album. Special mention to Thunder drummer Harry James though, he helps make the track what it is and proves yet again that behind the comedic grin, he is deadly serious about his craft. The welcome addition of female backing vocals to recent Thunder albums (and live shows) has been a game-changer and much of ‘Dopamine’ benefits from the lush backing vocals from Carly Louise, and The Duchess herself, Julie Maguire, ‘One Day We’ll Be Free Again’ is a great example of this, ditto the shimmering-bluesy tones of ‘Even If It Takes a Lifetime’ and closing track ‘No Smoke Without Fire, the backing vocals really seep into these tracks in particular and help raise them to another level. 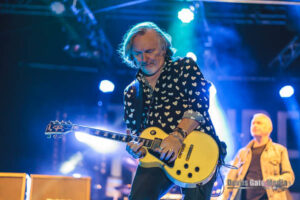 Along with the simply gorgeous trademark Luke Morley-penned ballad ‘Unraveling’ (“I can’t sleep, it’s 4am, the walls are closing in once more, cold house, soulless rooms, no trace of you here anymore…but I’ll never give up, and I’ll never give in, even though it’s a fact I’m losing it…”) – damn, no one quite writes heartbreak as Luke Morley does – the early front-runner for the most memorable moment of the album might just be the Black Keys-tinged ‘Black’. One of a handful of tracks that brings a bit of variety to ‘Dopamine’, and sees Thunder mixing it up, it has heaps going on throughout the five-minute running time; another killer drum sound from Harry James, some gorgeous guitar tones everywhere you turn (Tarantino would be drooling over them), even a bit of a glam-vibe going down – utterly spellbinding…as are Luke Morley’s rather lovely vocals on the opening verse of ‘Last Orders’ and his thick, fuzz-filled guitar solo on the same choon. 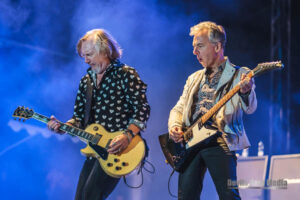 ‘Big Pink Supermoon’ is another fine example of Thunder mixing it up; at six minutes in length it is the longest of the sixteen tracks that make up ‘Dopamine’, and one that would have slotted seamlessly into the stripped-back ideology of the ‘Please Remain Seated’ project. Lots of room for Morley to flex his muscles on this one and run with it, and that’s exactly what the chap does; one particularly dazzling guitar solo seeps into a most unexpected (and wonderful) saxophone solo that fades into the night sky like some down-on-his-luck Raymond Chandler character just after he sparked up a Marlboro under a flickering streetlight. If ever a few minutes of Thunder music conjured up cinematic imagery, then the last few moments of ‘Big Pink Supermoon’ do the job. Another example of the variety on the album would be the Parisian-cafe vibe on parts of ‘Just a Grifter’, a track that ultimately belongs to the subtle (but crucial) basslines from Mr. Reliable – Chris Childs. And right now Ben Matthews must be practicing the piano parts of ‘I Don’t Believe the World’ (and ‘Is Anybody Out There?’) in readiness for the upcoming Arena tour? A track that sneaks up on the listener with some gorgeous backing vocals, and a fizzing guitar solo – it has so much going on throughout it that it will make your head spin. 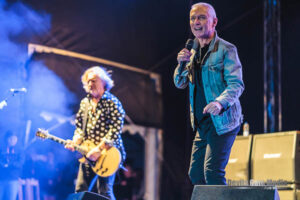 There’s not really much that you can say about Danny Bowes that has not already been said. ‘Dopamine’ lands in his fifth decade in this game, and it finds him in masterful form. From the laid-back vocals of ‘Even If It Takes a Lifetime’, the heavy-ass tones of ‘All The Way’, the swing of ‘Dancing in the Sunshine’ and ‘Disconnected’, to the stop-you-in-your-tracks heartache of ‘Is Anybody Out There?’, Danny Bowes is in untouchable form. Perhaps it will only be when Thunder finally does call it quits that Bowes gets mentioned in the same breath as Paul Rodgers, Frankie Miller, Steve Marriott, and other legendary UK vocalists. For now, though, Thunder shows zero sign of slowing down and jacking it in, and in this form why the hell should they? It’s not often that a band can still surprise their fanbase after thirty-odd years – while still retaining their core sound – but Thunder makes it look easy.

‘Dopamine’ is out now via BMG. More information, here.