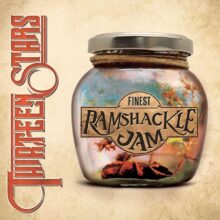 Coming in at 15 tracks, and 52 minutes in length, no-one could accuse Cumbria’s finest export since the Cumberland sausage; Thirteen Stars, of cutting corners on their latest opus: ‘Finest Ramshackle Jam’. Living in the disposable age of skipping tracks if they don’t instantly grab within seconds, it’s always a risk opting to release something that requires time and effort from the listener. Thirteen Stars have stuck to their guns and the end product is a good old fashioned “album”. 50 years ago this would have been released on double-vinyl with gatefold packaging, every stoners dream; the perfect tool for rolling, you dig?

The songwriting has come on leaps and bounds since the last studio album; 2015’s ‘White Raven’, and the common thread running through the album seems to be heart. Southern Rock n Roll might be the preferred genre upon which to plant the Thirteen Stars flag, but peel back the covers and ‘Finest Ramshackle Jam’ has many surprises.

‘Running So Long’ is a heart-on-the-sleeve tribute to Tom Petty which features a trademark Benmont Tench-like keyboard sound, soaring backing vocals, and a gentle, strumming, acoustic vibe in the background. Vocally, ‘Sweet Lies’ has shades of The Quireboys, musically, it has an E-Street touch to the keyboards, whereas ‘Rebel’ goes full Springsteen/Southside Johnny with a beautiful, light Roy Bittan-esque piano sound. ‘Sorcery’, however, is a throbbing, pulsating Sabbath/Zeppelin/Vanilla Fudge inspired piece of magic. The mix of fat guitar tones with a heavy organ sound is utterly mesmerising. ‘Razor’s Edge’ keeps it heavy Sabbath-wise, and chucks some ‘Working Man’ early Rush into the pot. Add the Duane Eddy twang of ‘Be There In The Morning’ to the mix, and the lively horns on ‘Mint Jelly, and you have way more than merely Southern Rock n Roll.

‘Finest Ramshackle Jam’ is ultimately a guitar album. The guitars are crucial in backing up the warm, dulcet tones of Thirteen Stars frontman; Hoss Thompson, and similar to an act like Blackberry Smoke, the guitars never get in the way of a good song. Nope, none of that shredding malarkey here. Instead, copious amounts of sizzling, melodious guitars with heaps of soul. Throw a dart in any of the 15 songs, and sit back and marvel at the tone which Hoss and his compadre Jax Sedgwick coax out of their trusty axe’s (love, love, love the short solo on ‘I’d Do Anything’ for instance). ‘Sleeping’ has a fantastic, grunge feel to the guitars, with a bit of a Jerry Cantrell party going on, whereas much of ‘Keep Calm And Carry On’ recalls Dean DeLeo and Stone Temple Pilots. ‘Steel Horse’ is full of life, and there is so much going on behind Hoss’s vocals that the listener will need repeat listens to save missing out, possibly even some banjo picking in there?

The seven-minute ‘Only A Soldier’ ends this fine album on an epic note. A stellar example of authentic storytelling which begins with a soft acoustic intro, and grows into this towering piece of art. The guitars are fiery with a lush extended solo mid-song, the backbone of the band; Andy Bates on drums and Mike Reid on bass, put in one hell of a shift and play like their lives depend on it. Easily, one of the stand-out musical moments of the first half of the year. Yes, it is that good.