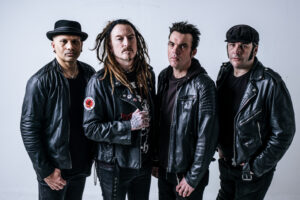 The original introduction on this review was hastily edited at 18:00 hours on Thursday 2nd September, the night before The Wildhearts released their brand new album ‘21st Century Love Songs’. The original introduction was all about how ‘21st Century Love Songs’ was going to be released on the same day that Iron Maiden released their new album, which meant that all those supposedly highbrow media outlets would more than likely fill their quota of rock/metal reviews for the month, on the first Friday of the month, by only reviewing Maiden and skipping releases from Bokassa, The Picturebooks, Night Flight Orchestra, and of course The Wildhearts. Then at 18:00 hours, it all changed. Abba announced a new album. Not so much a case of “stop the presses”, more like “time for a rethink fat boy”. You see, to these ears at least, there is more of a connection between Abba and The Wildhearts than Maiden and The Wildhearts. Who else but Ginger could slip in such glorious vocal harmonies and melodies into a brutal aural assault such as ‘Institutional Submission’ (which includes the killer line “…he’s just a cunt by association…”)? Ginger Wildheart: not only the UK’s most underappreciated songwriter but someone who has the perfect ear for a cracking melody, even when the rulebook says there isn’t room for one. 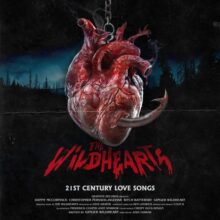 Coming two years after ‘Renaissance Men’ (their first new album in a donkeys age, and the undisputed album of 2019) Danny McCormack, Christopher Persaud-Jagdhar, Ritch Battersby, and Ginger Wildheart share top billing on the horror movie poster-style cover artwork that heralds the arrival of ‘21st Century Love Songs’ – one almighty headfuck of an album. Harsher, and not as instant as its predecessor, ‘21st Century Love Songs’ still has lashings and lashings of the glorious power-pop sensibilities that The Wildhearts do so well, but with a darker, schizophrenic edge. It’s an album that grows with each listen, and certain little nuances become more apparent over time (the gorgeous Stuart Adamson-like guitar melodies peppered throughout the bombastic title track is just one example), and unlike a new Maiden album, with a new album from The Wildhearts, the listener doesn’t have a clue what’s coming next. Multiple changes in style and tempo, and often throughout the same song (‘Sleepaway’ and its rockabilly segment is sheer blissful), means that the listener is glued to whatever device they prefer to consume their music on. 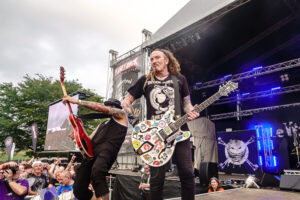 It’s hard to listen to the SLF-name checking ‘Remember These Days’ and not get flashbacks where you might remember certain moments of discovery throughout your own individual musical journey, and Ginger does that so fucking well. Who can listen to ‘29 x The Pain’ and not think about the first time they heard the bands that Ginger namechecks? Well in a sense, ‘Remember These Days’ is similar to that. It’s nostalgic and in the hands of any other band it might have come across schmaltzy, but this is The Wildhearts, and when Ginger opens the track with the line…” I miss this like I miss my dead friends” it’s like a swift punch to the solar plexus and one that knocks all the air out and drops the listener to their feet. God, I fucking love this band. ‘Splitter’ (enormous guitar sound on this one) and the aforementioned ‘Institutional Submission’ form a gnarly, knockout one-two and show the heavier side to the other Fab Four. In a band with Ginger and CJ leading the front line, it can be easy to get swept away with the force of nature that both are on the live stage, but these two tracks highlight the importance of the backbone of the band: Ritch Battersby behind the kit, and Danny Wildheart on bass. Full of Danny’s bass rumble (‘Institutional Submission’ is his moment to shine, much like ‘Directions’ later on) and some phenomenal, almighty work from Ritch (same on ‘A Physical Exorcism’) – these combined ten minutes highlight the importance of a strong engine room team in complete sync. 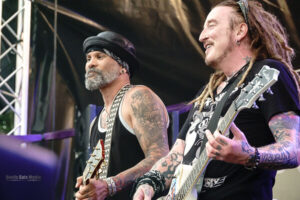 The middle section of the album is perhaps the strongest heard this year, and shits on the very notion of a mid-album slump. ‘Sleepaway’, followed by ‘You Do You’, and ‘Sort Your Fucking Shit Out’ are powerful enough to give a eunuch a semi, and all provide copious opportunities for audience participation on the forthcoming tour. ‘Sort Your Fucking Shit Out’, in particular, is towering. One of Ginger’s strongest songs in decades, it’s a bit uncomfortable in places knowing that you are bouncing along to the tale of a man dealing with his own mental health issues, but it really is nigh-on impossible to resist once the chorus kicks in and the other guys join in with their gang vocals. Expect to hear both ‘Sort Your Fucking Shit Out’ and ‘Sleepaway’ (along with the title track, and ‘Splitter’) live some time very soon.

‘Renaissance Men’ ended on an emotional moment with ‘Pilo Erection’ with Ginger singing “Don’t be scared of me, just be there for me…I’m someone to turn to when the world looks terrifying”, and ‘21st Century Love Songs’ ends on a similar note with Ginger laying bare his demons for all to see on the self-explanatory ‘My Head Wants Me Dead’…” Here I am alone again, I can’t believe this is happening, it’s been a while but it’s back again…this is bad, this is dangerous…”, with the backing vocals of “Save me…save me” kicking in, later on, to add more emotion to what is already an emotional song.  It’s a raw, and honest way to end an album full of integrity (full of dazzling guitar work n’all!, another stellar job from producer Dave Draper) and who could have predicted years ago that The Wildhearts would have delivered two of the most vital studio albums of new material in the current century? The underdogs strike yet again. And the band certainly has some headaches now with regards to compiling a setlist!

The Wildhearts kick off their new tour September 3rd in Cardiff, tickets, here.