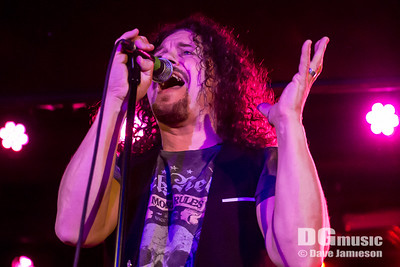 With the Christmas party season in full swing, what better way to enjoy the festivities than kicking off your heels and having a bop with The Sweet? Leave any grumbles or cynicism at the door, this was a night to forget about what ails ya (or the impending G*****l E******n), and simply just smile for an hour or two. 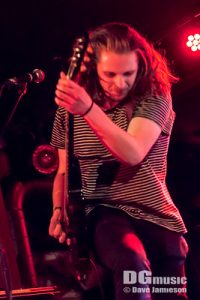 Opening act Novatines will certainly make you smile, that’s for sure. Guitar-driven rock which at times drops a subtle Kasabian influence into the equation (in particular the vocals on ‘Medicine’), but that is only a slight comparison as Kasabian haven’t sounded this urgent in some time now. The vocals are key, not just the lead vocals from Jamie Beale, but also the killer harmonies from his bandmates. So it comes as no surprise to hear that The Sweet mainman himself, Andy Scott, produced their forthcoming debut EP. If ever there was a band that made great use of vocal harmonies then it was The Sweet, and this seems to have rubbed off. Both ‘Hate Love’ and the rabble-rousing current single ‘Come Alive’ are fine ear-worm moments that rattle around the subconscious for some time afterwards. Debut EP ‘Wasted Youth’ is unleashed February 2020. Check Novatines out here and look out for headlining dates around the release.

The chants of “We Want Sweet” welcome the band onto the stage, and they slam straight into perhaps one of the greatest show openers ever – ‘Action’. A driving drum sound from Bruce Bisland, the statement like opening vocals from Paul Manzi, then those patented vocal harmonies. The change in pace and power as the song builds up to its finale is immense. Damn, what a way to kick off a show! 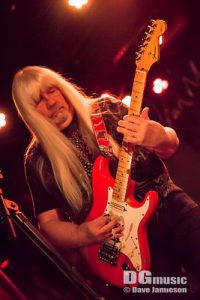 No time to rest as the familiar foot-stomping intro to ‘New York Groove’ is beaten out by Bisland as Manzi leads the hand-claps. Now you might be familiar with the Russ Ballard-penned classic ode to New York City due to Ace Frehley’s solo version, but you really need to check out the version that The Sweet have produced. Wow! Mashing up the original with Alicia Key’s ‘Empire State Of Mind’ is inspirational, especially with bassist Lee Small playing the role of Keys and displaying an incredible voice.

How do you follow up these two bangers? With another banger of course! Time for ‘Hellraiser’, and time for Manzi to show why he is such a highly regarded vocalist. When required to, he can hit the high notes with ease, but during ‘Set Me Free’ he displays such a towering sense of quiet power and restraint that Ian Gillan immediately springs to mind. He’s also the same warm and engaging frontman that he was during his time with Cats In Space, and seems at ease taking on the role as frontman for The Sweet. He introduces the timeless ‘The Six Teens’ as “the best song that Nicky Chinn and Mike Chapman wrote”, and you can tell that as a long term fan of the band he really means it. It is a belting track regardless, and one often overlooked because of the sheer volume of The Sweet’s heavy hitters.

Talking of heavy hitters, how is this for a closing thirty minutes: ‘Teenage Rampage’, ‘Wig Wam Bam’, ‘Little Willy’, ‘Love Is Like Oxygen’, ‘Fox On The Run’, ‘Blockbuster’ and ending on what else but ‘Ballroom Blitz’ (“ready Steve?… ready Andy?… ready Glasgow?!”). If anyone needs a reminder of the legacy that Andy Scott has been a part of for 51 years, and let’s be honest here – an often overlooked legacy – then that list surely is it.

With Manzi and Small now onboard alongside Bisland and multi-instrumentalist Steve Mann (Lionheart/Michael Schenker), Andy Scott has assembled a fine band that is keeping the flame (and the legacy) alive. If you left tonight’s gig and weren’t smiling from ear-to-ear, or singing the keyboard intro to ‘Fox On The Run’, then you have a cold, dead heart.